We met Kyle and Jorja Lerner, owners of Harney Lane Winery and Vineyards, in the Lizzy James Vineyard. Jorja is the fifth generation of her family to farm in Lodi. Meeting in the vineyard rather than going straight to the tasting room emphasized that they were farmers first. We walked on the sandy soil between rows of old Zinfandel vines, a cool breeze stirring the green leaves.

There are twenty acres of Zinfandel and eight of Chardonnay. Thedore Roosevelt was in his first term when Zinfandel was planted in 1904. Those vines are still growing and producing fruit. In the 1970’s they planted in between these old vines, “newer” vines to increase output and to fill in where vines had failed. These newer plantings are less gnarly and grow up vertical stakes. This mix of the very old and fairly old vines adds to the flavor profile of the wine made from this vineyard.

Kyle pointed to what he called a Ladybug; an insect called a Ladybird in England. This tiny insect eats about 5,000 aphids in its lifetime. A number made even more impressive when you consider that their lifespan is about 1-2 years. Using this type of natural pest control is part of Harney Lane’s committment to the environment and sustainability.

For those who don’t know; Lodi has an entire program encouraging their farmers to be green and sustainable by establishing something called the Lodi Rules. From the Lodi Growers Association:

LODI RULES for Sustainable Winegrowing is California’s original sustainable viticulture program. This program truly began from the ground up, with grape growers deciding it was important for the future of the Lodi region. Our certification process is rigorous, based on science, voluntary, and third-party accredited and audited. LODI RULES certified growers make up an innovative community with a history and commitment to farming quality winegrapes through the implementation of viticulture practices that balance environmental, social, and economic goals. LODI RULES is designed to communicate their commitment to sustainable agriculture to wineries and the general public.

When the Lerner’s purchased Lizzy James in 2000, the weeds grew taller than the vines. It was six years later that they started to make their own wine. That farmer first attitude was clear in the passion with which he talked about the individual treatment each vine receives. Pruning and cutting back of clusters focused on what that vine needs.

The Tasting Room is on sixty acres of land that the family bought back in 1900. Seven years later the first grapes were planted. As noted above, nearly a century passed before the family started to make their own wine. Those sixty acres are the Home Ranch Vineyard. The name reflecting that to this day family members live on this plot.

We tasted in the extensive gardens that lie behind the tasting room. Trees, bushes, and flowers make this a delightful location to sit. The garden provides natural social distancing and the feeling of privacy for those tasting Harney Lane wines.

Our first white was the 2019 Home Ranch Chardonnay. The nose was floral with honeysuckle. Taking a sip I found a creamy mouth feel with pineapple flavours. The finish added a light minerality. It aged for nine months in 28% French Oak, with 50% malolactic fermentation. The wine retails for  $28.

The second was the 2019 Scottsdale Chardonnay. It shared a price with Home Ranch, but there was a noticeable  contrast in style. It undergoes no malolactic fermentation and no sur lie. For the non wine geeks, what this means is that the wine is lighter and brighter with no oak, vanilla, or butter on the palate. The nose was less intense with alluring peach notes. Its flavor was of sharp Meyer lemons with a light salinity. It was not lean or austere on the palate, instead it was refreshing and balanced.

The Scottsdale was of a style closer to my ideal Chardonnay, but the Home Ranch was well-crafted and very quaffable.

The third white was the Albariño. The fruit comes from two-and-a-half acres on the Home Ranch vineyard. I loved the peach and mineral notes of the nose, but it was the taste that sent me into near rapture. A great balance between lush fruit and acidity. Flavours of green apple and tropical fruit with a sprinkle of ginger. The finish was surprisingly long and softened to reveal banana.

This complex balance is no accident but the result of a careful mix of fermentation in stainless steel and neutral french oak barrels. The wine is then aged sur lie before early bottling.

The red half of the tasting consisted of three different Zinfandels. That might seem to be a case of playing to Lodi stereotypes. However, these were not unsubtle jammy wines. Each demonstrated balance and a character all of its own. We were impressed.

We started with a wine made from the vines amongst which we had strolled earlier. The Lizzy James Old Vine Zinfandel sells for $36. The name of the sandy soil in which it grows is Tokay Fine Sandy Loam; reference to the once dominant grape of the area.  The nose was of espresso and earth. The first sip led with a soft sweetness. The mid-palate provided a good acidic contrast, before finishing with ripe fruit. Throughout spice danced across my tongue.

The Home Ranch Zinfandel was the cheapest of the trio at $25. Lighter in color, its nose offered aromas of red fruit. These led to flavours of red currant and silky tannins. The brightness of this wine was a welcome antithesis to the aforementioned stereotypical Lodi Zin.

The last of these Zins was the $40 Scottsdale Zinfandel. On opening, the nose was somewhat funky. Left to breathe and open in the glass it mellowed to cooked fruit. In the mouth it led with jam but complexity emerged as blueberry driven acidity lifted the wine.

All three of these wines were intriguing, complex, whilst remaining approachable.

The story of farmers turned winemakers will repeat in future articles. What makes Harney Lane stand-out is a wonderful tasting area and the wines. The verdant flora sheilds you from the sun and other guests. Chard and Zin are common varieties. What is not so common is the craft in making them so well at these price points. 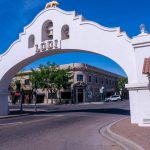 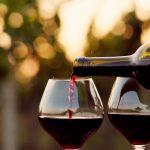