Prie is but a two minute walk from Klinker Brick. Geographic proximity aside these wineries are very different. Klinker Brick is large with wide distribution. Prie is small and focused on selling direct to consumer. Klinker Brick focuses on familiar varieties made with a conventional approach. Prie has a portfolio of wines from less commonly planted varieties. These two wineries are another example of the diversity of winemaking styles in Lodi.

John and Lisa Gash own and run Prie Winery. They started the business in 2010 in Livermore. Two years later they bought ten acres in Lodi on which both their home and winery sits. Nine of those acres are under vine. Additional fruit comes from vineyards that they manage.  The result is about 2,000 cases a year with over thirteen different grape varieties.

Our tasting started and ended with Grenache. The first was a white wine: 2018 Grenache Clair. The last a red wine: 2017 Grenache. You may recall that we tasted a Grenache Blanc at Acquiese. Prie’s white is different as it uses Grenache Noir grapes – those used for red wine.

The resulting wine had a subtle nose of peach. An artfully balanced mouthfeel that was creamy yet fresh with notes of apple. The finish revealed citrus notes.

The 2017 Grenache was light in color, almost looking like a rosé, The nose was subtle but enticing. A bright, satin soft mouthfeel exposed black pepper and strawberry.

The second wine of the tasting was the 2019 Counoise. This is not a commonly planted grape, although it is a variety allowed in Châteauneuf-du-Pape. Less than 1% of that appellation’s planting is Counoise.  Prie used it for a single variety wine. The result was low in alcohol at 10.6%.  The nose was of fruit, earth, and pepper. A light bodied wine: sharp with a tase of raspberry and orange. A light dust made is appearance in the finish. Intriguing for wine geeks, but a good wine to serve chilled on a warm summer’s evening.

The 2017 Barbera was next. John described the fruit as coming from a messy non-photogenic vineyard. Its owner an eighty-seven year old farmer. Another example of Lodi’s focus on farming. The wine had bright aromas of red fruit. Good acidity balanced juicy raspberry notes with a dusty undertone.

Next up we once more headed into a less usual grape. This time we had the 2018 Mencía. Wine Folly states that the grape only grows in Spain and Portugal. There is one planting in the US, an acre in Lodi. The first harvest was the year before the vintage we tried. The nose was of redcurrant, toffee, and floral notes. Bright, light, lush red fruit mixed with herbs and smoke and a dusty texture. This was a wine that made me want to drink more of the variety and hope that the acre in Lodi expands.

From a Spanish variety we moved to a German one. The 2018 Dornfelder had an intense nose dominated by blueberry. Taking a sip, acidity asserted itself. In the mid-palate blackberry emerged and in the finish light tannins dusted across my tongue.

Unusual grapes ( Mencía, Dornfelder, and  Counoise) appeal to the wine geek in me. However, what makes Prie a must visit if you are in Lodi is that they make fascinating and drinkable wines. They are not different for the sake of being different. 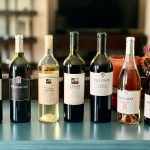 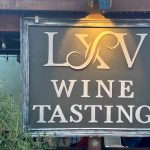