Lodi is a charming farming town in California’s Central Valley. In the 1890s, wine grapes started to be planted in the area. Flame Tokay was the main variety of grape that was planted at the time, but it had all but disappeared from the region by the 1980s.

Today, Lodi has a reputation for mass production wines and big jammy Zins. There is a kernel of truth in those beliefs as it grows twenty percent of California’s wine grapes, much of which ends up in bargain priced wines. Zinfandel is the most planted grape in the region, but is just one of 125 different varieties. However, all of that being said, we found premium quality wines and unique grapes being grown there with a wide variety of wine styles.

The Central Valley bakes in the summer sun with the heat being trapped causing sweltering nights. Lodi may sit in the Central Valley, but it benefits from ocean breezes that blow through the Carquinez Strait and up the Delta. These lead to cool nights which to help maintain acidity in the ripening grapes. This temperature difference is called diurnal shift and results in grapes that can make balanced, delicious wines.

In the nineteenth century, an insect called Phylloxera destroyed over two-thirds of European vineyards. The wine industry recovered by planting phylloxera resistant root stock. Famers then grafted shoots of the desired grape variety to those root stocks to grow hardy, healthy vineyards.

California suffered its own Phylloxera outbreak in the mid twentieth century. However, the insect does not do well in sandy soils which luckily are common in the Lodi region. Thus, there are a large number of old vines that survived in the area. These include the oldest Cinsaut vines in the world; the Bechtold Vineyard. Planted in 1886 these old vines produce fruit which make superb, nuanced wines.

Vineyards owned by families for several generations which have moved to making wine after years selling grapes was a common story thread shared by many of the wineries we visited. For example, we stood in the Wegat Vineyard with three generations of the family that bears its name. The eldest, pointed to a farmhouse in which his grandfather had lived on the property. Five generations lived have farmed that property and they are adding to that legacy by now making wine for themselves.

We spent a few days in the region as guests of Lodi Wine. We were joined by fellow wine journalists Rick and Gary Dean-Link (Strong Coffee to Red Wine) and Allison Levine (Please The Palate).

The next few posts on our blog will focus on some of the wineries we visited, and will show the diversity and quality of the wines made in Lodi. We hope you will follow along on our journey of discovering these delicious, under-rated, interesting wines. 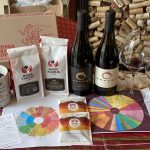 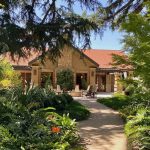