The fifth vineyard on our exploration of Temecula was Robert Renzoni Vineyards. The winery is built in the Tuscan style of architecture.

Amber comments: I have to say that the property is lovely. I was amazed by the architectural details of the building itself including the entry door which we later found was an exact replica of a door to a family property in Italy. The property sits next to Fazeli Vineyards and sits amongst rolling hills filled with vines and a view of the valley of vines below.

We’d like to thank and acknowledge the beautiful photography of Jimmy Fu of Jimmyfu-tography for his photo contributions to this post. He’s amazing and we were thankful he joined us for this session.  We’d also like to give a shout out to Pam Rossi from Always 5 star, and Visit Temecula Valley who helped us arrange this tasting.

Our tasting was with the Proprietor, Robert Renzoni, and his winemaker Olivia Bue. Olivia is the only female head winemaker at any of the forty-odd wineries in Temecula. Olivia studied Viticulture and Enology at UC Davis. She started at Robert Renzoni as Assistant Winemaker in 2014 and has been the Winemaker since January 2017. Robert is a fourth-generation American of Italian descent. He founded the winery ten years ago, opening the current building in May of 2014. Robert said that his approach is to “put every nickel into making the best wine we can”. Olivia agreed, saying that “we have no excuses”.

Amber comments: One thing that struck me about Robert and Olivia is that they are both very focused on the wine they produce. Yes, the building and surrounding area are beautiful, but they see that as a secondary detail for the experience.

We started our tasting with the 2017 Pinot Grigio. This is far from my favourite varietal; I associate it with adjectives such as bland, insipid, forgettable. This wine was a revelation; demonstrating that in the right hands you can use these grapes to make an interesting and complex white wine. The wine sells for $24 ($18 to club members).

It has contact with the lees. Robert said that making this wine required twenty-four hour TLC. The medium intensity nose was loaded with ripe peach. It is the wine that truly impressed me. Crisp green apple, a tang of citrus, a delightful minerality, and subtle cream to round out the wine. Without a doubt, the best Pinot Grigio I have tasted.

Amber comments: I have to agree with David here. I was really blown away by this wine. It had such lovely textures in the mouth and it screamed: “I’m special”.

The second wine was the 2017 Chardonnay ($28). The wine ages on the lees for ten months in 40% new French oak. The Chardonnay undergoes 100% malolactic fermentation (MLF). The nose was an appealing mix of vanilla and pineapple. Given the oak and the MLF, I was surprised by the delightful acidity. I found flavours of pineapple, pear, lemon, and vanilla. This was an example of a Chardonnay striking a good balance between oak and fruit. A Burgundian bottle was used in a nod to the European style of the wine. During our visit, the 2018 vintage was halfway through fermentation, a process that includes three days of stirring.

Our first red was Brunello di Sangiovese ($45). The name reflects the fact that the clone of Sangiovese used to make this wine is the same as that used to make the well-regarded, and expensive, Brunello di Montalcino. The wine had a translucent garnet colour. The nose was bright with notes of cherry, raspberry, and wood. Taking a sip, I was struck by bracing acidity. Behind that first impression, I found cherry, espresso, and cedar. In the finish, there was pepper dusted raspberries and a hint of vanilla. The wine spends twenty-two months in 40% new French oak. The medium body and bright nature of this wine would enable it to fill the role of a warm weather red.

Amber comments: I am going to raise my hand here and embarrass myself. Robert asked me in the tasting if I knew why he could call it a Brunello. With my brain scrambling, I thought it had to do with the proprietary naming laws of wine. I thought the Brunello region of Italy hadn’t “copyrighted” their name so it could be used.  Nope, I was wrong. In fact, the only way he could get Brunello in the name is to add the word Sangiovese to it. Very smart thinking.

Renzoni use twelve different cooperages; another example of the care taken in creation with their wines. The barrels have varying levels of toast from medium to medium plus; with the higher end of the scale being the most popular. Most of the barrels are French, with some Hungarian and American oak used; the latter being sourced from forests in Pennsylvania.

The fourth of our tastes was of the 2013 Cabernet Franc ($75); the grapes for which are grown about a quarter of a mile from the winery. The nose was of medium intensity, but intoxicating; the aroma a decadent pleasure to enjoy before a first taste. That taste did not disappoint as a well-balanced wine offered acidity, raspberry, cherry, pepper, and dusty tannins all in harmony. The wine had spent 26 months in 45% new oak. Production is 110 cases.

Next up was the 2014 Sangiovese, Vineyard Riserva ($40).  Aged for 24 months in new French oak, the nose offered an intense bouquet of cherry and pepper. The palate showed bright acidity that was followed by cherry, pepper, a tang of lemon, and a hint of vanilla. The tannins were subtle, requiring focus to find. Sangiovese is something of a focus for Renzoni; as shown by his stated mission to make five styles of wine from this variety.

Amber comments: Be still my heart! A WOW! I am a Sangiovese lover. I could wax lyrical for days about all of the characteristics of Sangio that I love.  However, this was a show stopper. Up to this point, I have had very few American examples of Sangiovese that I have loved and this is one of those few.

The Sangiovese was followed by a taste of 2014 Sonata ($50), a 50/50 blend of Brunello di Sangiovese and Cabernet Sauvignon. The nose was rich with cherry and wood. As with the previous wine, the first impression was of a delightful acidity, which softened with flavours of fruit and dark chocolate. The tannins were assertive; the wine felt tight, I feel it is several years from being at its best. Aging takes place in 40-42% new French Oak. Both varietals start off in separate barrels, and about three-quarters of the way through the aging they are blended. The wine ages for a total of two years. Robert proudly told us that Wine Enthusiast had said about Sonata: “This wine is a classic example of what does well in Temecula.”

It is not a Napa Cabernet Sauvignon

We then moved on to the 2012 Estate Cabernet Sauvignon. The nose provided a mix of green peppers and cherry. It offered a well-balanced palate of cherry, plum, pepper, offsetting medium plus acidity and well-integrated tannins. Drinkable now, but with the promise of several years of further improvement. Unfortunately, in 2013 and 2014 Renzoni did make a wine of this varietal; all of the Cabernet Sauvignon grapes going into the Sonata blend.

Amber comments: Robert was very funny about his Cabernet Sauvignon. He just doesn’t feel the need to try to compete with Napa Cabs. Instead, he chooses to focus on varietals that shine for Temecula and its terroir. Still, it was a tasty Cabernet Sauvignon and I would be happy to serve it to guests.

We finished our tasting with the 2013 Fiore di Fano; their most expensive wine at $75. The wine is a blend of 45% Brunello di Sangiovese, 40% Cabernet Sauvignon, 8% Merlot, and 7% Cabernet Franc. The wine spends twenty-four months in 50% new French Oak.

This beauty takes its name from the town of Fano, which sits about three hours drive South of Venice on Italy’s Adriatic coast. It was here in 1870 that Robert’s ancestor Frederico was born. At the tender age of sixteen, he started making wine; showing how far back Robert’s winemaking roots lie. The nose was bright with notes of cherry and baking spice. The excellent wine had a subtle complexity with black cherry, raspberry, and spice; a fitting finish to a fine tasting session.

Amber comments: The talent Olivia Bue has as a winemaker blows me away. Olivia shows real maturity and elegance in her winemaking. I have become a big fan.

It is not just the wine that reflects Robert’s attention to detail. The Italian restaurant that Robert operates at the winery brings bread daily from New Jersey and flies in flour from Italy for the pizza dough. We enjoyed a delightful lunch after our tasting; which demonstrated how well the wines pair with food. The combination of beautiful views, great wine, and delicious foods make Robert Renzoni Vineyards a must visit if you are in Temecula. I would go as far as saying that it represents enough of a reason to visit the valley.

Amber comments: David is underselling this food. The meatball sandwich I had for lunch was THE BEST I have ever tasted! The flavor in the meatball was outstanding, and the sauce a delight. I would have liked a bowl of the wonderful marinara sauce to slather on my sandwich.

Our takeaway from our visit to Robert Renzoni Vineyard? Fantastic wines, amazing hospitality, and delicious food. The hallmarks in our opinion of any great winery. Temecula wine country has shown us it can shine amongst the brightest out there.

*Note: Our tasting and lunch were complimentary in exchange for an honest review. All thoughts and opinions are our own. This is good wine… buy some! 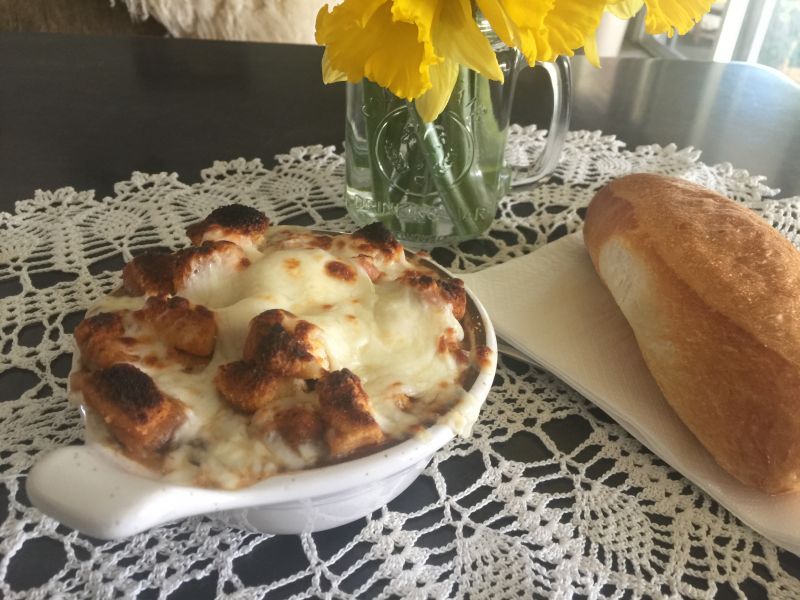 How to make French Onion Soup – The Perfect Fall Recipe 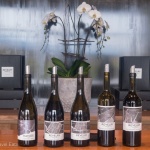