Before we return to the US, we took a week to relax on Croatia’s Adriatic Coast. Even on vacation, we are drawn to opportunities to taste wine, so we could not pass Razonoda Wine Bar as we strolled the streets of Dubrovnik’s Old Town.

Dubrovnik is a historic city on the Adriatic Sea, that dates back to the Seventh Century when it was known as Ragusa. It is a popular tourist destination, even more so after the success of the HBO television programme Game of Thrones, in which the city stars as King’s Landing.

Amber and I were staying in the small port town of Cavtat, which predates Dubrovnik by 1300 years, as it was founded in the Sixth Century BC. We caught a boat that took us the 10 miles up the coast to Dubrovnik.

After we had taken lunch in a pizzeria situated in an alleyway barely wide enough for the tables, we were strolling with no particular destination in mind when we came across the Razonoda Wine Bar. A blackboard outside advertised fifty-six Croatian wines by the glass. Our afternoon now had a purpose.

Amber comments: Yes, because walking around and enjoying the ancient city and beautiful sights wasn’t enough purpose for you… *eyeroll*.

The only seats were high chairs; either at the bar or at tables. Amber and I would have preferred regular chairs, but this was the only negative we found at the Razonoda Wine Bar.

Amber started with a sparkling wine, the Tomac Brut. The wine had high acidity that was expressed through green apple flavours. The other flavours were honeycomb and seaweed. This was a drinkable, but uninspiring sparkling wine. Research on the web suggests that this is made from Chardonnay grapes.

My first wine was made from a traditional Croatian grape: Pošip. We had an unremarkable example of this variety at lunch, but what attracted me to this particular expression was the name on the label: Grgić. Mike Grgich is a famous Napa winemaker. He made the Chardonnay at Chateau Montelena that won the 1976 Judgement of Paris. He then went on to open his own Napa winery: Grgich Hills Estate. Mike Grgich was born in that part of Yugoslavia that is now Croatia and after it gained independence he established Grgić in his homeland. We had been underwhelmed by his Napa Chardonnay, but his Pošip wine was a very different story. The nose was a heady mix of honey and kumquat. The light-bodied wine exhibited medium acidity. The wine had an excellent balance between fruitiness in the form of white peach and a grapefruit flavoured citrus bite; backed up by a distinct minerality. The enjoyment of this stunning white was enhanced as the Razonoda Wine Bar had served it at the perfect temperature.

We moved onto red. Both of our wines were made from another native Croatian grape: Plavic Mali. Our first pick was the Dingač Skaramuča. The nose was of prunes and cloves. It was medium in both body and acidity. The flavours were of plum and blackberry supported by firm, distinct tannins. The long finish extended the pleasure of drinking the wine. This wine was crying out for steak.

The other Plavic Mali was a 2013 Postup Zicada. The wine was a transparent ruby in colour that reminded me of Pinot Noir. Bringing the glass to my nose ended any similarity with Pinot; as I encountered intense aromas of stewed berries and cedar on the nose. Amber found it had a nose reminiscent of mac and cheese. Raspberry jam was my first tasting impression; the wine has more than a hint of sugar at the front of the palate. The mid-palate was dominated by tannins. In a long finish still dominated by those tannins, raisins emerged. This was not a bad wine but was a clear second choice to the Skaramuča.

Razonoda means pleasure in Croatian and that is an excellent one-word summary of our visit. 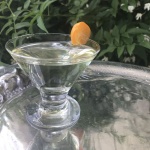 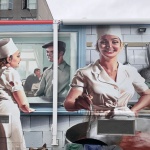