Touring the Pyramids with my (Young at heart) Mom

I want to start out this post with a huge thank you to our tour operator Egypt Travel. Without them, I know that we would not have been able to see as much of Cairo as we did, nor would it have been so convenient, or enjoyable. They rock, and I would highly recommend you use them for your tour needs in Egypt. They were on time, courteous, efficient, knowledgeable, organized, and all around great people.

The first day of our tour was to the pyramids of Saqqara and Giza. Our tour actually started upon arrival at Cairo Airport. Egypt Travel was there to pick us up, right outside the airport promptly holding a clearly written sign for us. They also texted us beforehand so we would know what the car looked like along with our driver’s name. Our driver was efficient, SAFE (which is a really big deal in Cairo) and had the patience of a saint in all of the traffic. We didn’t know then, but he was to be our driver for our entire tour.

For $55.00 per day per person, our tour included a professional guide named Doaa, and a driver along with lunch, and all of the entry fees to each attraction. They handled absolutely every single detail. All we had to do is go along. They picked us up in the lobby of our hotel (Cairo Marriott) each day and dropped us off each evening. Having a driver was key to our trip as the driver would let us out at the closest possible entry to any attraction and was always waiting for us at the closest exit. By the time we had finished touring each attraction, my Mom was ready for a rest.

On the first day of our tour, we headed out to the Pyramids at Saqqara which was about an hour drive outside of Cairo. These are the first Pyramids in the world built around 2670 B.C. by Pharaoh Djoser who was the Third Dynasty of Pharaohs in Egypt.

This was absolutely fascinating as we toured through all of the ruins, step pyramids, and temples and learned about its history. I actually think that this was more interesting than the famous Pyramids of Giza, as we could walk through a lot more of the temples and saw a lot of the hieroglyphics in those.

Having a knowledgeable tour guide taking us through made such a huge difference to the enjoyment of the pyramids as Doaa (our tour guide) not only knew the history and significance of each area, she knew the easiest route to everything so my mom didn’t have to work so hard. The ground was very uneven and there were stairs steps to climb. One needs to be fairly fit to be able to do it.

One of the things that surprised me when we were touring was to see wild dogs who had climbed to the top of the pyramids at Saqqara. I couldn’t figure out how they got themselves up there because if you saw how tall they are, it is surely a feat for anyone. Unfortunately, my photo didn’t turn out of the dog staring at me from the top. There are lots of feral dogs and cats in Egypt as people don’t as a general rule keep dogs as pets. I guess I shouldn’t be surprised seeing dogs and cats at the pyramids as they were a large part of ancient Egyptian culture and many were buried in the temples and pyramids with the pharaohs. I read recently that scientists have uncovered a mass grave of mummified dogs in the pyramids.

After we finished at the pyramids of Saqqara, we visited a traditional carpet making school which was interesting and appalling all in one. Interesting to see how the carpets are all still made by hand, and appalling to see how young some of the people were who were making them. After the tour, we were taken upstairs to the gallery where we could purchase the carpets if we chose to do so. The cost includes shipping to the USA. It was noticeable how much cheaper it was to get a quality carpet there than what we would pay in the USA. I already had several inherited carpets in my home or I would have bought some.

*Note:  When visiting any Egyptian shop of any kind know two things: One, the tour guides get a commission for taking you into it. You are not obligated to buy anything, but that is the system. Secondly, even if you aren’t going to buy anything you will ALWAYS be offered Egyptian hospitality before you are allowed to even look. That means that you will be offered a drink of bottled water, soda, juice, coffee or tea. This is at no cost to you and considered polite to accept if you can. I have never been offered anything other than a closed sealed container of water, soda or juice so you need not worry that something weird is going on with it.

We then headed to the Pyramids at Giza which is about a 45-minute drive from Saqqara. By car, you get the opportunity to see real life outside of the city. Farmers with donkeys laden with fresh fruits and vegetables carrying them to market, wild dogs and cats in the streets, children playing ball in the dust and dirt, women carrying piles of freshly baked bread on their heads. It was both interesting and sad to look at these sights with western eyes and sensibilities.

One of the things that people don’t understand about Cairo is that it is a city of many layers. It has been conquered so many times by so many different cultures that it has retained a bit of each of those in its development. One can see buildings and architecture of French, Greek, Roman and English influence along with the Moorish and Arabian styles you would expect. The juxtaposition of all of that, along with the basic block construction apartments, and brand new skyscrapers is a very interesting contrast.

Finally getting to Giza, we entered the complex for the Pyramids. When I visited the pyramids years ago, you just drove up to one parking lot and walked. These days, there are roads leading to all of the pyramids and you can drive between them. There are donkeys and camels and horse-drawn carriages, but I didn’t choose to take advantage of any of them as my mother wasn’t fit enough to get on a camel, and I didn’t like the look of the horses or working donkeys. Many people think that you can enter into the Sphynx, but you can’t. It is a solid piece of rock. The head was carved out of one single stone. The head was supposed to be a portrait of the king with the body of a lion which symbolized protection.


The Pyramids of Giza are the ones most people think of in Egypt with the Sphinx. The Great Pyramid is the only one of the ancient wonders of the world that is still standing today. There are actually three separate pyramid complexes in Giza and there are six separate pyramids. These pyramids were built 2560-2540 B.C. They were built by the 4th and 5th dynasties of Pharaohs.

You can for an extra fee and if you are very fit, enter the interior of the Great Pyramid. It is dark and cramped and smells a bit, but you have to be able to climb up to the entry point and you can’t stand up inside. You are walking very hunched over. I couldn’t do it with my mother.

The complex is huge and there are spectacular views of the pyramids that can be had from the top looking down. At the top of the pyramid complex sits a little group of market stalls where you can buy souvenirs. These stalls are licensed by the government so if you are desperate to buy a cheap bit of papyrus, you shouldn’t get too ripped off. However, I would avoid pulling money out in front of the strolling vendors. That is asking for trouble. There are lots of children running around who are ever so helpful offering to take photographs with your phone. I was a bit nervous to hand over my very expensive iPhone to one of these children, but our tour guide did it many times throughout our trip.

Our day ended with lunch at a traditional Egyptian restaurant that was located directly across from the pyramids. It was obviously built specifically for tourists but the food was great and I am sure it has the best views of the pyramids in the area. We were treated to a lunch of traditional Egyptian delights with a selection of Mezzas (appetizers and dips)  followed by a mixed grill of meats, and rice. Dessert was jello and almond and honey cakes. My favorite part of the meal though was the amazing cardamom and cinnamon flavored rice that had raisins and fruit in it. It was a wow!

*Note: Egyptians tend to eat their meals way later than we are used to. Our lunch, for example, each day was somewhere around 4 p.m. after our tours had ended. Most Egyptians eat their dinner around 9 p.m. or so.

By the end of the day, we were tired. It was a great day, one that neither one of us will ever forget. Follow on with the rest of our adventures in Cairo by reading our other posts about it. We explore Religious Cairo and the famous market Khal El Khalili. 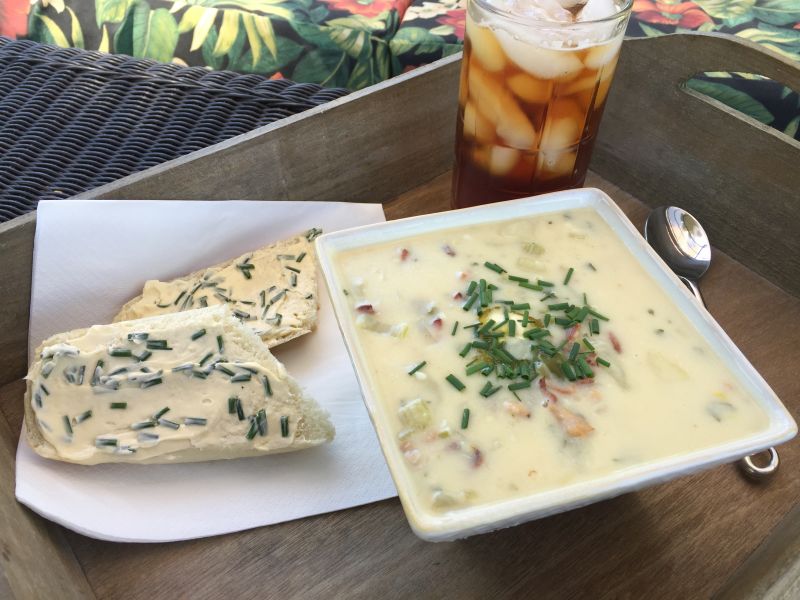 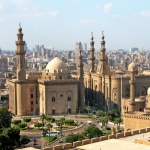 Visiting Religious History in Cairo with my (Young at Heart) Mom