Amber and I were invited by the kind folks from Visit Temecula and Pam Rossi (Always 5 Star) to visit Temecula and taste some of the wines that are produced there. This gave us an opportunity to explore some of the wineries in Temecula Valley SoCal Wine Country. I had envisaged writing a single article describing our visit, but we were so impressed with the wine, the winemakers, and the wineries, that over the next few weeks I shall write several articles; each one focusing on a single winery.

Temecula is a town of about one-hundred thousand people. The city lies about ninety miles south-east of Los Angeles, sixty miles North of San Diego, and nearly five hundred miles South of Napa.

Amber comments: I have to admit to you that I have not been to Temecula since I was a teenager (which of course was only a few years ago – ha!). In my mind, it was horse country and a gateway to the old Lawrence Welk property where my aunt who was a big band singer used to perform.  Wow, has it changed! Gone is the sleepy little town we used to pass on the way to San Diego.  It is now a bustling community filled with beautiful wineries, cool places to eat and drink, and tons of things going on. It felt to me more like an upscale suburb of Orange County rather than some isolated place on the way to somewhere else.

Temecula Valley Wine Country is celebrating fifty years of winegrowing. In 1968 Vincenzo and Audrey Cilurzo planted the first post-prohibition commercial vineyard in the valley.  That first planting consisted of twenty-five acres of Chenin Blanc and fifteen of Petite Sirah. Six years after that planting Callaway Winery made the first wine in the valley. Temecula Valley became an AVA in 1984 and now has over forty vineyards. The fifty-year claim almost seems to be a case of false modesty as Spanish missions were growing grapes in the valley as far back as 1820.

The climate in Temecula Valley is well suited for vines. The altitude, about 1500 feet above sea-level means the valley is cooler than much of the neighbouring land. In addition, the intense heat in the desserts to the East causes air to rise and draws cooler ocean air through the Rainbow Gap and the Santa Margarita Gap. The result is a Mediterranean climate that is well suited to growing Italian and Rhone varieties.

We had no previous experience of Temecula wine, nor did we arrive in the area with any preconceptions or prejudices. In conversations with Southern California friends, it is clear that Temecula Valley Wine Country has a reputation as a party place, an adult Disneyland, with visitors more interested in drinking than tasting wine. This negative reputation was captured in print by a Los Angeles article in 2011 describing it as: “a wine playground, where play wines upstage real wines”. Our experience, however, is that there are winemakers in Temecula Valley that are focused on making great wines. If you have been avoiding the area for fear of encountering almond champagne guzzling bachelorette party-goers, then you are missing out. We hope that as you read about our experiences at Temecula Wineries, you will be motivated to visit and try the wines for yourself.

Amber comments: We both came away impressed and excited to have the opportunity to talk about the wines they are making in Temecula. It isn’t the new Napa – it doesn’t need to be. They make wine varietals that don’t try to compete with Napa Cabernet Sauvignon and Chardonnays. They make wines that work with their climate and soil types and they make it well! It was fantastic for us to experience. We hope you follow along on our journey and get inspired to try Temecula wines out for yourselves. 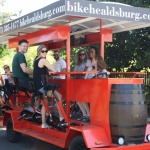 Bike Healdsburg, the new fun way to do a wine tour… 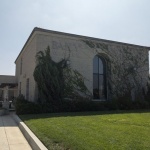