The red wines from Côtes de Bordeaux are blends with Merlot as the primary variety, with the addition of Cabernet Sauvignon, Malbec, and Cabernet Franc.

What makes it worth looking for wines from Côtes de Bordeaux is that these regions are not as well-known as, for example, Saint-Émilion; which borders Côtes de Castillon. This lack of fame is reflected in prices that are more affordable.

The wine that I tasted for this article had a rather uninformative label. It stated the origin, the vintage, and the name of the wine: Salmanazar. Usually, wines from Côtes de Bordeaux also tell you from which of the five regions the wine was sourced, but not in this case. The wine’s name is also a little confusing. Salmanazar is one of the biblical names given to large wine bottles; Jeroboam and Rehoboam being another two. A Salmanazar is a nine-litre bottle, holding as much wine as a full case of regular bottles.

This 2009 Salmanazar cost $13. The nose was an appealing first impression with blackberry leading the way backed up with aromas of a damp creek and drying flower petals. The first sip was not as rich with fruit as the nose had suggested; earth and dusty tannins dominated, with muted fruits very much in the background. The finish is fairly light. If a Napa Cab is the taste of ripe summer fruits, this wine is the last taste of summer as the year fades to a dry and mellow autumn. Overall, I quite liked the wine and it tastes better than the $13 price point would suggest.

We paired the wine with two different dishes, a simple cheese plate with some chunks of smoked ham and crackers and Hanger steak with fries. Whilst the wine was ok with the cheese, it really came into life with the barbecued hangar steak. The wine added a smokiness to the flavor of the meat making it feel far more luxurious in the mouth. If you are going to pair this with cheese, we found that it really needs a strong cheddar to stand up to it.

Here is a list of our group #Wineophiles and what they have had to say about their experience with Côte de Bordeaux. All of the posts will be live on Saturday, May 19.

Lauren from The Swirling Dervish offers “Côtes de Bordeaux: Why It Should Be on Your Wine Shopping List” 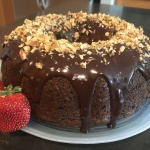 Recipe of the week – Best Chocolate Cheat Cake Ever! – April 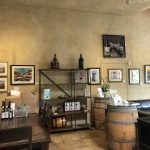