Off the Square, Albemarle, NC

While visiting my sister and her husband in North Carolina we spent the weekend at their lake cottage in Carolina Forest on Lake Tillery. It is a beautiful and peaceful place. We went to dinner on Saturday evening at one of their favorite spots in the nearby town of Albemarle. It was called Off The Square. My sister is an amazing at home chef and her husband is a bit of a fussy eater, so I knew if they were raving about a restaurant it was going to be great. They weren’t wrong.

The little town of  Albemarle is adorable; everything you can imagine in a picture perfect Southern town. Gorgeous and graceful homes, quaint shops, and beautiful scenes. Off The Square is nestled among this little slice of heaven. We lucked out and were able to score a last-minute reservation even though the restaurant was really busy. They accommodated us graciously and we were seated immediately.

The restaurant itself is an eclectic mix of old and modern; giving it a funky feel I liked. The ceiling was made from copper treated embossed tin with a verdigris finish. The floors were a warm antique wood stripped floor that was obviously original to the building. The walls were a mixture of bricks and plaster, but it was the colorful modern art on the walls, created by local artists, that gave it the colorful pop and a cool funky vibe. 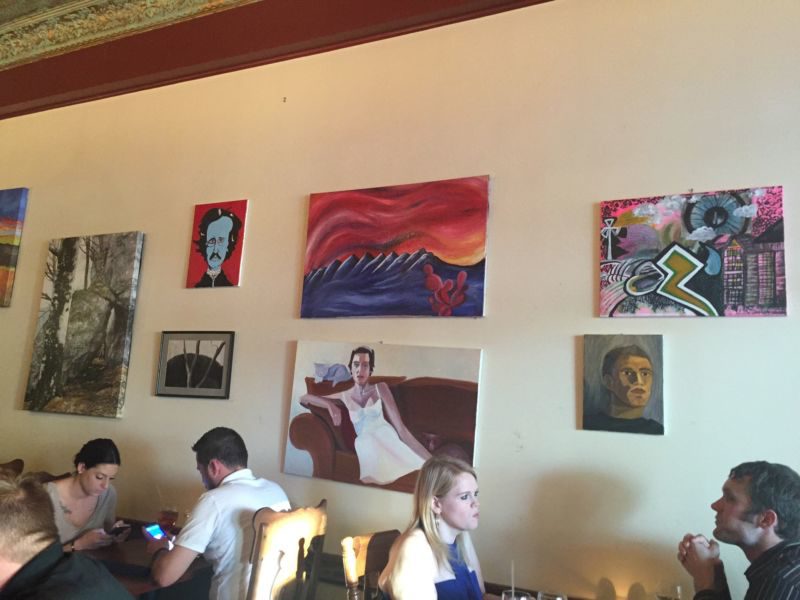 It seemed as though my sister and brother-in-law knew everyone in the restaurant. The waitstaff was extremely charming and competent. Menus and water were brought out immediately. Glasses of wine were ordered and those showed up in a blink of an eye. The service seemed effortless, which is always a sign of a good restaurant. 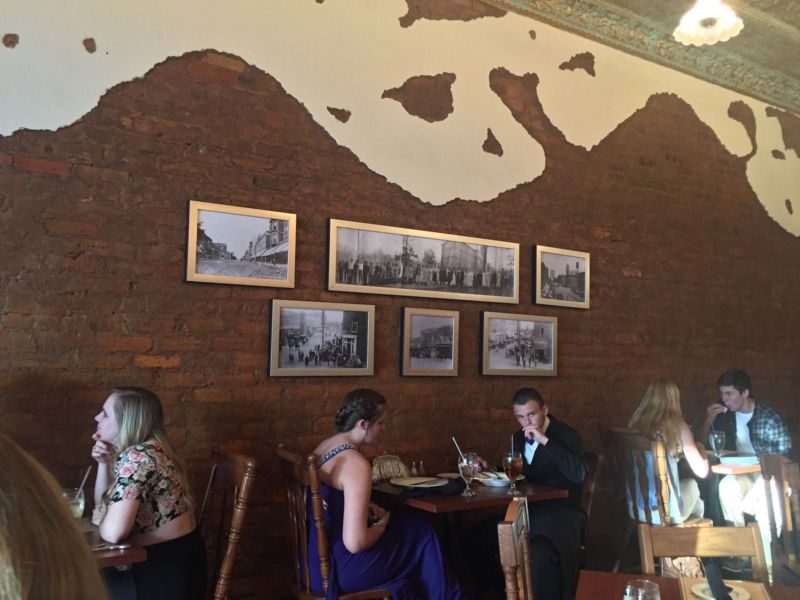 While perusing the menu there were so many great looking choices it was hard for me to decide. My sister pointed out the shrimp bisque and suggested that as a starter. I was ready to take her up on that suggestion when her husband suggested we share the brie in filo appetizer instead. Wow, was I glad I did. (Though a part of me would have loved to taste the soup as well.)

I try to stay away from bread, but they brought out gorgeous fresh French bread slices with grated Parmesan cheese sprinkled over it. At my sister’s urging, I took a bite and tried very hard not to inhale the entire plate on our table. Apparently, local nuns bake the bread. I could believe that as I was taken to heaven with each bite. 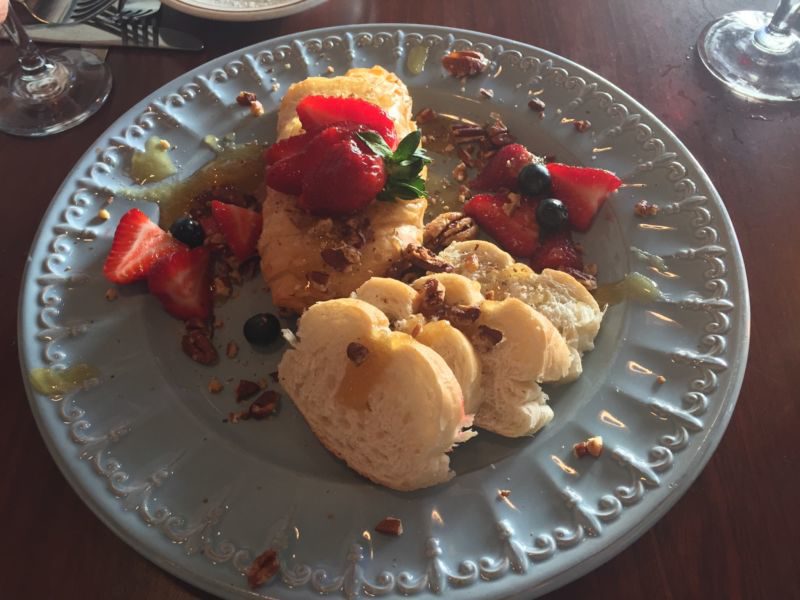 The brie was outstanding. It was beautifully presented; a feast for the eyes. What really made it great was the honey drizzle on top. They also placed fresh strawberries, blueberries, and chopped pecans on it as a flavorful garnish. It was served with that heavenly nun bread. When I took my first bite I went into food orgasm. It was crazy, crazy good. All of the flavors were so fresh, rich, and bright that my taste buds were having a party all on their own. Are you getting the hint that I loved this dish? 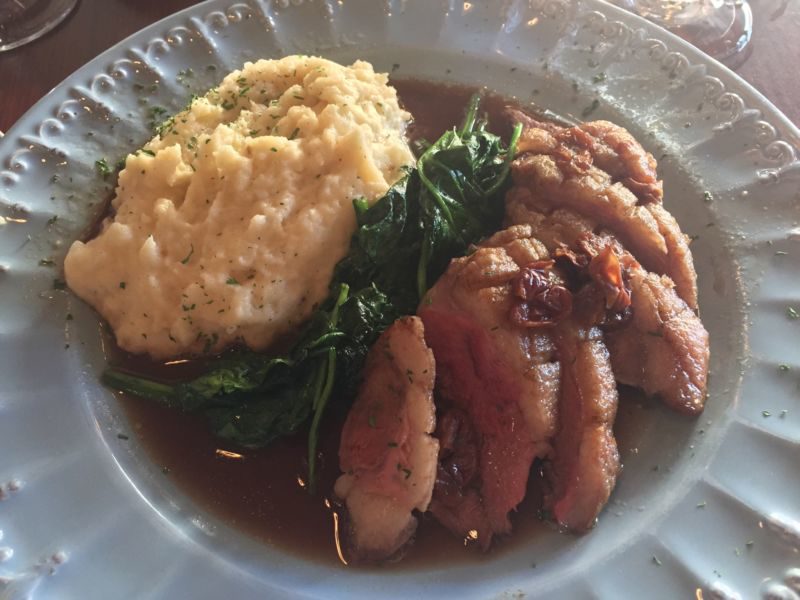 For my main meal I ordered the pan-fried duck breast that was finished with a sour cherry and red wine reduction. It came with garlic mashed potato and sautéed spinach. The duck was beautifully cooked with a light pink interior; exactly as it should be. Although they called the sauce a reduction, I would categorize it more as an au jus as the consistency was far thinner. It was delicious and a wonderful pairing with the richness of the duck. I would have liked the duck fat seared a little better to give it a crispy flavor and texture, but it was good as is. The sautéed spinach that accompanied the duck was perfect. It was lightly cooked, so it retained its lovely color and all the flavor. I am unsure about the potatoes; I kept tasting them to figure out if I liked them or not. I think they were good on their own, but the overwhelming flavor of sour cream or creme fraiche in them wasn’t a good pairing for the duck. I would have liked it better if there was just a simple garlic flavor. The sour cream flavor just was too much for the sweet and savory notes of the duck. Overall the dish was great and I really enjoyed my plate. 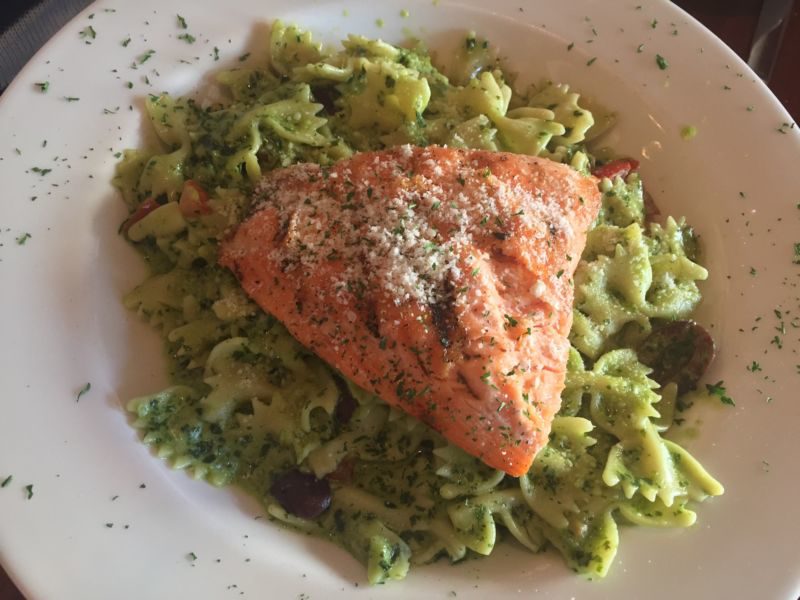 My sister ordered the pasta Margherita; a creamy pesto sauce with roasted cherry tomatoes and Kalamata olives over bowtie pasta. She topped it with a piece of pan-fried salmon. I had a bite and it was absolutely delicious. I don’t really care for olives but they worked perfectly with her dish. Although her salmon was a little overcooked for my taste, it wasn’t killed and dry. It retained all of its moisture and flavor for an overwhelming win. 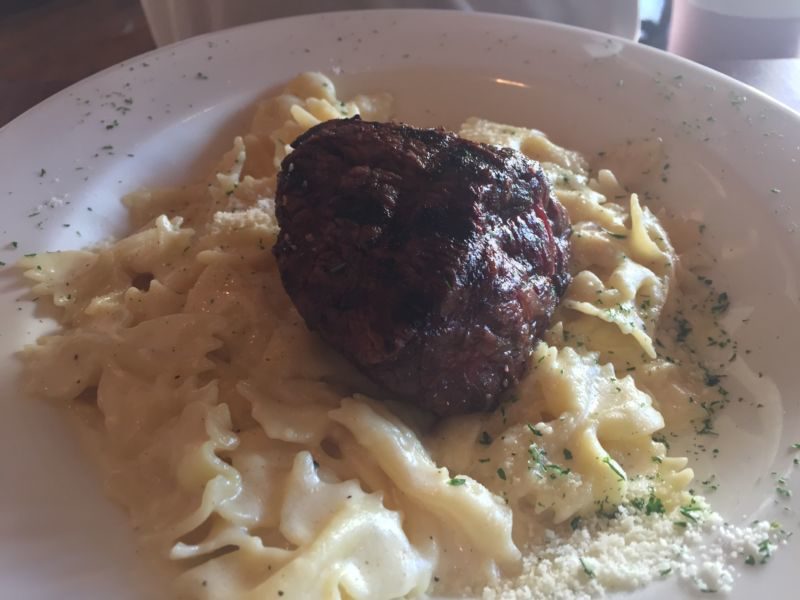 My brother-in-law ordered a filet mignon which was placed on top of a bowl of bow-tie pasta tossed in Alfredo sauce and finished with parmesan and parsley. His steak was cooked a perfect medium rare. The flavor of the Alfredo was a great creamy complement to the texture of the steak.

Along the way we also drank several glasses of their house wines; the Malbec, the Cabernet, and the Pinot Noir. All were really great for just being house wines. I may or may not have had several glasses, trying each one.  I don’t know, things are a little foggy. Besides, isn’t the rule “What happens on vacation stays on vacation?” I say yes to that one. 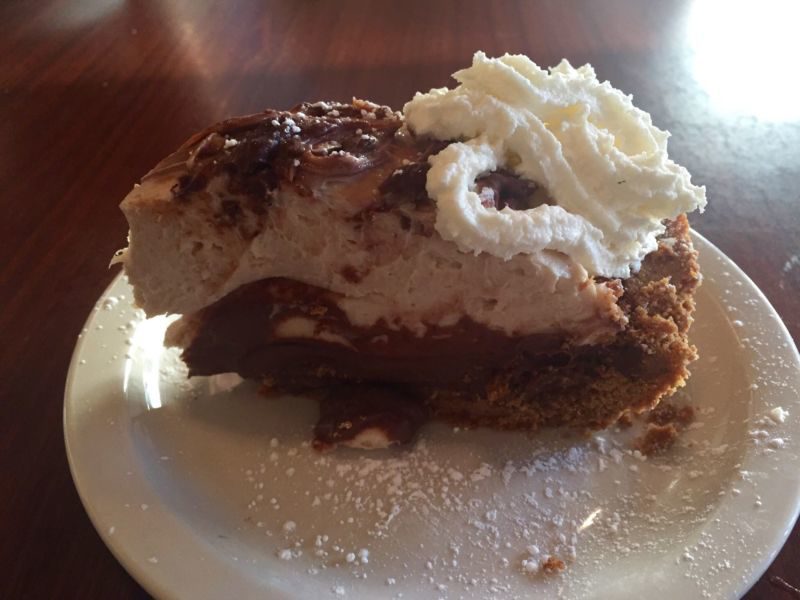 When I went to the ladies room, the rotten scoundrels I call family ordered us a peanut butter and chocolate pie for dessert. One look at it and I just knew I was sunk. Any pretenses of not over eating at this meal were tossed right out the window. It was worth every single calorie and the five miles I will have to jog to work it off my ass. The flavors of peanut butter and milk chocolate were there in lovely mousse form on a Graham cracker crust brimming with butter flavor. My sister told me that they often do that pie in a dark chocolate form as well. I don’t know what I would have done if that had been the case on this evening. I don’t think they could have pried me out the door had I eaten that. I would have had to move in a tent and just sit there eating pie for the rest of my life. Visions of this flashed through my mind. All I said to my sister though was; “Oh, now that would be good!”  I kept my cool.

What a great meal it was. Good food, good company and good wine. It doesn’t get better than that. 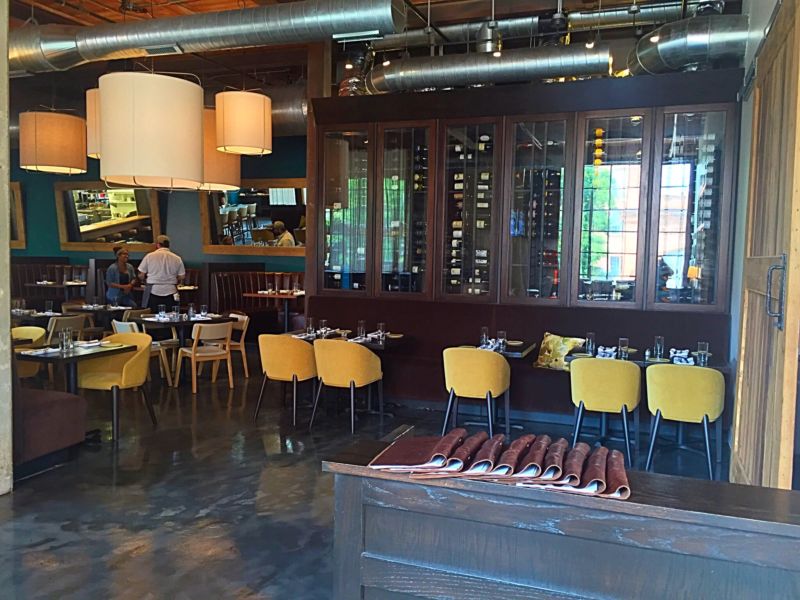 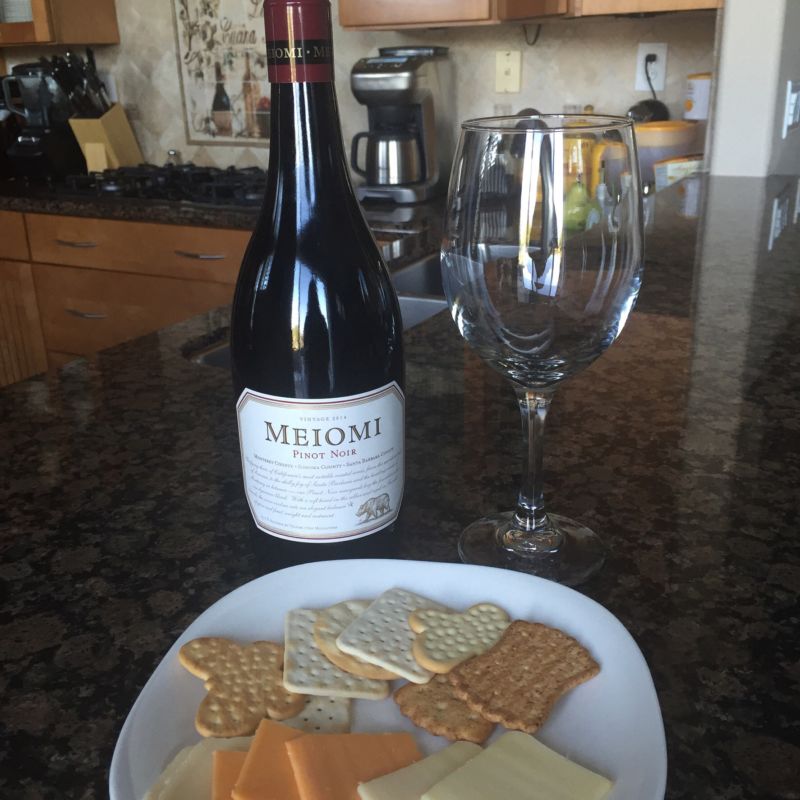