October is Merlot Month. It is also the month of our wedding anniversary. It was this latter event that took us to the coastal town of Mendocino. The former event was why we packed five bottles of Merlot.

Mendocino is in Mendocino County. Despite the name, it is not the county seat. That honour belongs to the city of Ukiah. We had visited Gualala, a coastal town on the Southern edge of the county. This was our first trip to Mendocino itself.  The population is under 1,000 people, but it is a popular tourist destination and an artist colony.

The reason for its appeal is obvious. Charming homes nestle on a headland that offers stunning views of the ocean. None of the coffee shops or restaurants belong to chains. In a nod to the area’s main business, the cafe offered to add CBD to any coffee.

Mendocino is full of inns and bed & breakfast hotels. However, we stayed a couple of miles south at The Little River Inn.  The drive to Mendocino crosses both Little River and Big River. Whoever, named these rivers was accurate, if unimaginative. The Inn offered rooms with a deck that allowed us to sit and see the sun sink with splendid colors into the ocean. A romantic setting and one well suited to sharing a few glasses of wine.

The nose was an appealing mix of redcurrant and mint. The medium bodied was bright with raspberry, a hint of herbs, and dusty tannins. Easy to drink and enjoyable. Drinkable now, but should benefit from a year or two of storage. The wine costs $16.

This Merlot hails from Dry Creek Valley in Sonoma County, a region strongly associated with Zinfandel. The grapes are from the four acre Salmon’s Leap vineyard. Nick Goldschmidt is the winemaker. Chelsea is his oldest daughter.

The nose was striking; a medium intensity mix of blackberry, vanilla, all spice, and ginger. A soft mouthfeel seemed initially to be simple. However, subsequent sips revealed subtle layers of blackberry, blueberry, underpinned by under-stated tannins. This combined with low acidity makes this a drink now Merlot. The wine is $19.99 at wine.com; which represents fine value.

It may have been our first visit to Mendocino, but was far from our first time with Grgich Hills Merlot.

The nose was blackberry, gorse, and straw. On the palate there is tart black fruit. The earthy tannins are very much in your face. Raspberry emerges in the long finish. The various parts of the wine are not yet fully integrated.  Like a painting that requires you to take a few steps back before it comes into focus, the Grgich Hills Merlot needs time before it unfolds into a masterpiece. It sells for $43.00.

Made with fruit from two Napa vineyards: Pahylmeyer Estate and Rancho Chimiles. The winemaker is Bibiana González Rave. A native of Colombia, she studied Viticulture in Cognac and obtained a degree from the University of Bordeaux. Her background is in the old-world and that shows in this elegant Merlot. The wine is 97% Merlot, 2% Malbec, and 1% Cabernet Sauvignon.

The intense nose was replete with aromas of blackcurrant and cloves.  In the mouth this wine is luxuriant. Rich blackcurrant and a smidgeon of cherry delight the palate. A long finish reveals herbal notes that enhance the fruit. Behind the fruit, integrated tannins stand firm like a vigilant bodyguard.

The Pahlymeyer Merlot was the best of the wines we took for our anniversary. It is drinking well now, but it should improve with age. That quality comes at a price, it is the most expensive of this quartet at $90. 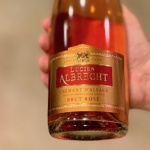 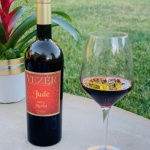