Saturday August 20th was the date for Luna’s Harvest Party. We had been to the party a couple of years previously and were keen to attend again. Harvest Parties are something of a misnomer; no winery would want to host a party during the actual harvest, as that is their busiest time of the year. However, this year the event was almost living up to its name; the Pinot Grigio grapes on the estate will be harvested starting on Monday. 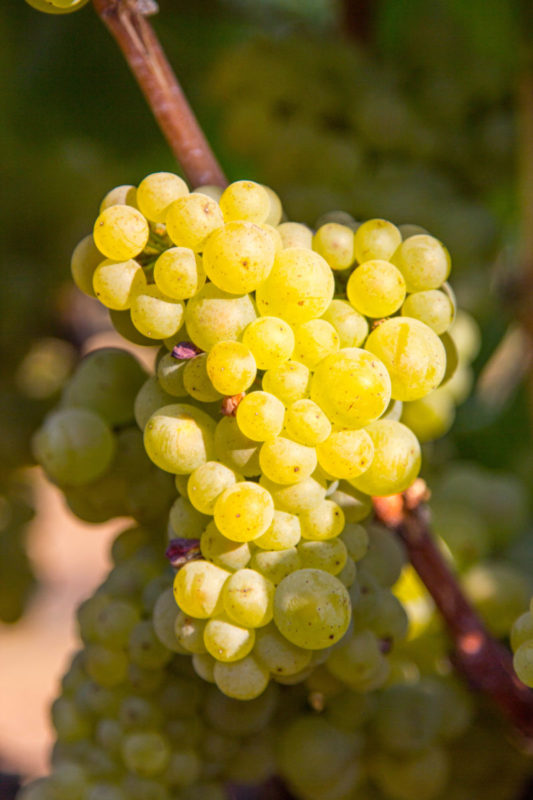 There were several wines available to taste: Pinot Grigio, Wente Clone Chardonnay, Sangiovese Classico, Napa Valley Cabernet Sauvignon, Howell Mountain Cabernet Sauvignon, and the newly released 2014 Sangiovese Reserve. Although most of the people were at the event to relax, California Girl and I were working on the blog, it was therefore our duty to try all the wines. I hope that our dedication to the cause is appreciated by our readers. 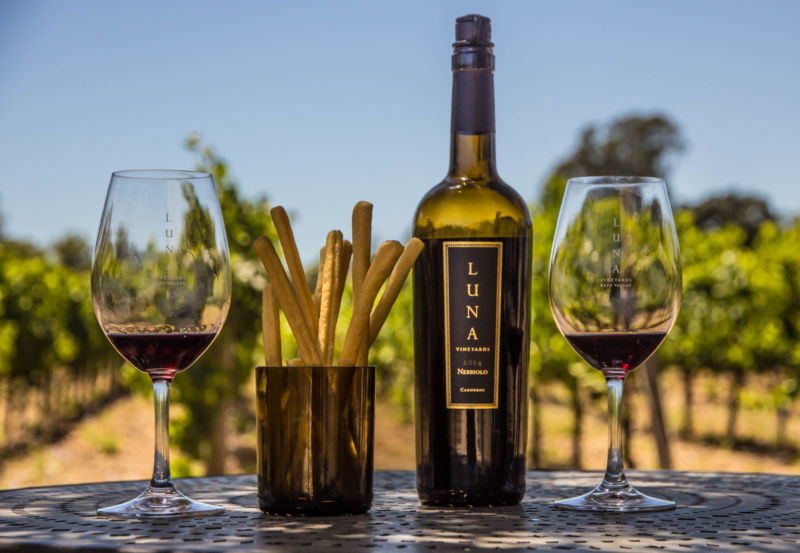 California Girl Comments: Yes, very hard-working. We left no wine untasted. I also spent a great deal of time trying to capture the spirit of the party with my photographs. I loved the Wente Clone Chardonnay, the Sangiovese Classico (still the reason we are members at Luna), and the Howell Mountain Cabernet (AMAZING). 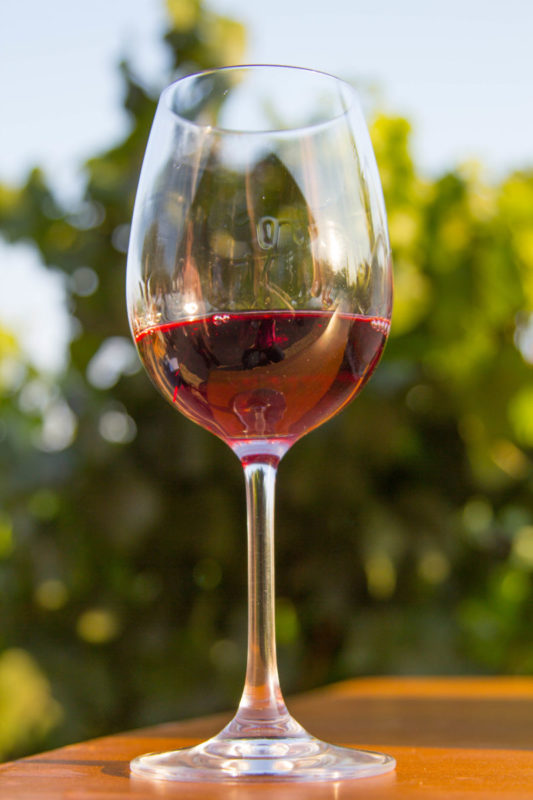 The event started at 6pm, dinner was served at 7:15pm. That gave us an hour to sample some wine, eat appetizers, and enjoy the beauty of the vineyard in the early evening sunshine. We sat about halfway between the tent in which the food was being prepared and the front of the vineyard. By the time the waiters reached us, their plates of food had been picked almost clean. I did wonder if people sat further away from the source of the food ever saw any of the appetizers. 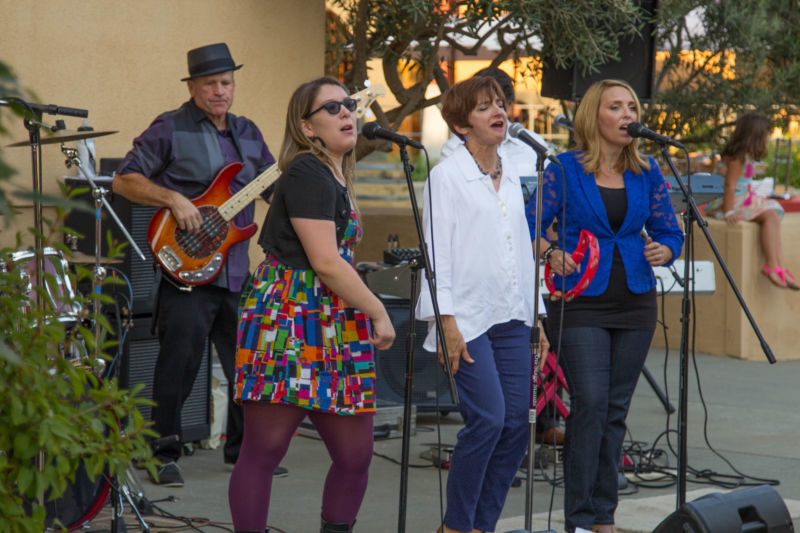 California Girl Comments: We also sat back and listened to the wonderful band that was performing. They were extremely talented and they added a happy party atmosphere to the event. 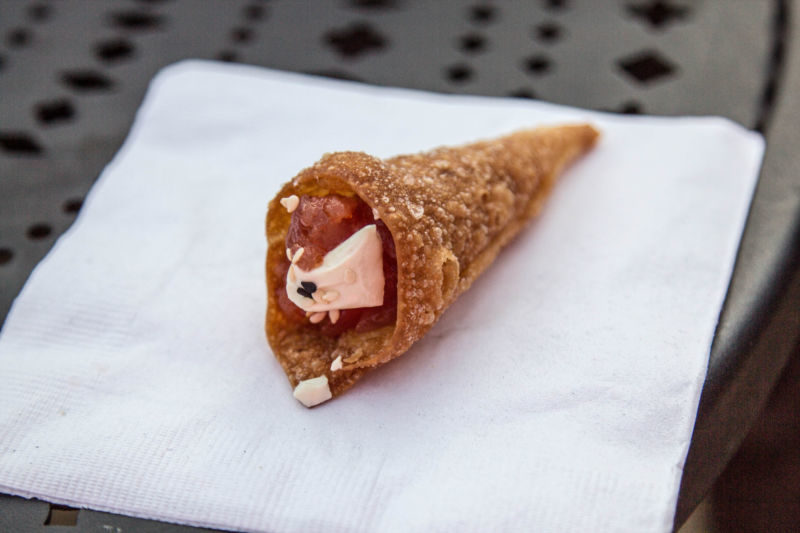 My favourite appetizer was ahi tuna in a won-ton horn. In addition to being very tasty, I loved the manner in which they were brought to the table: the waiter carried a barrel stave with holes for the horns drilled into it. The touch of wasabi complemented the spice in the Sangiovese perfectly. 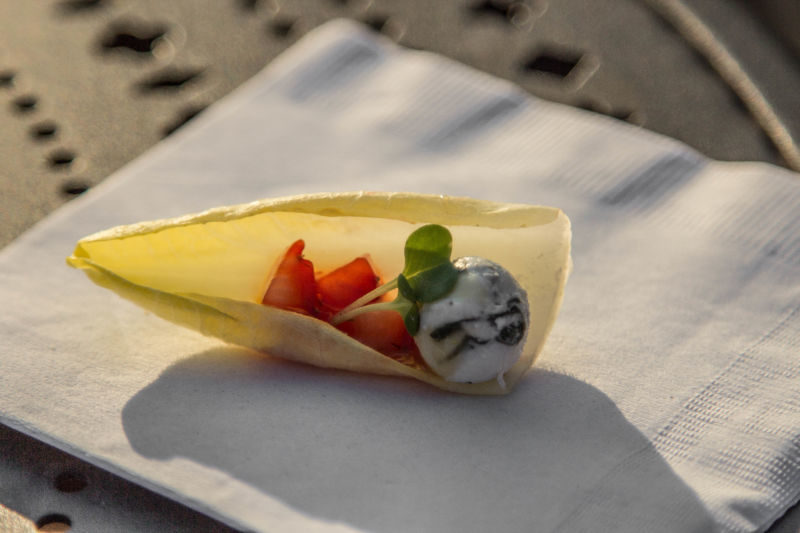 California Girl Comments: My favorite appetizer was the goats cheese and strawberries on a leaf of endive drizzled with honey. It was delicious. It was beautifully presented too. I had my bite with the Wente Clone Chardonnay. It was a perfect pairing. 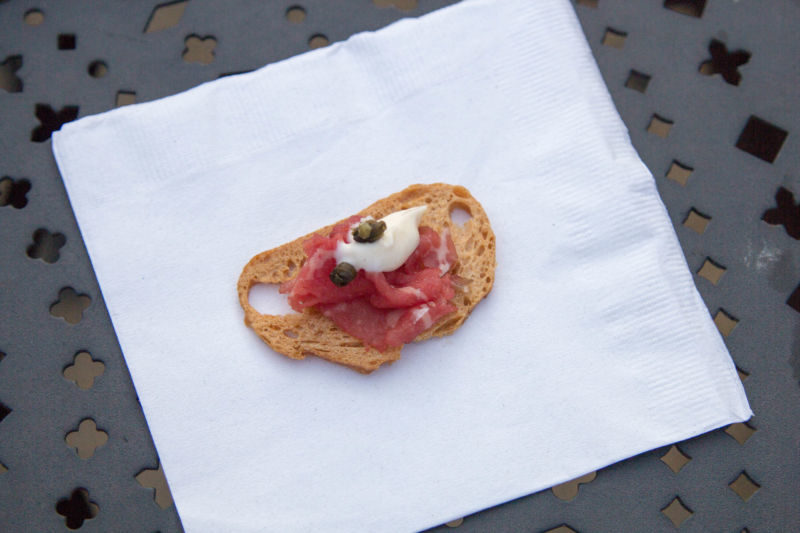 The beef carpaccio with a lemon-garlic aioli was also excellent. Given that two of my favourite appetizers are beef carpaccio and ahi; the caterer delivered just what I wanted.

California Girl comments: Well, I would have liked to sample more of the appetizers, but the plates were always empty. Had we not been working and on our best behavior I might have tackled one of the waiters for his tray of food. 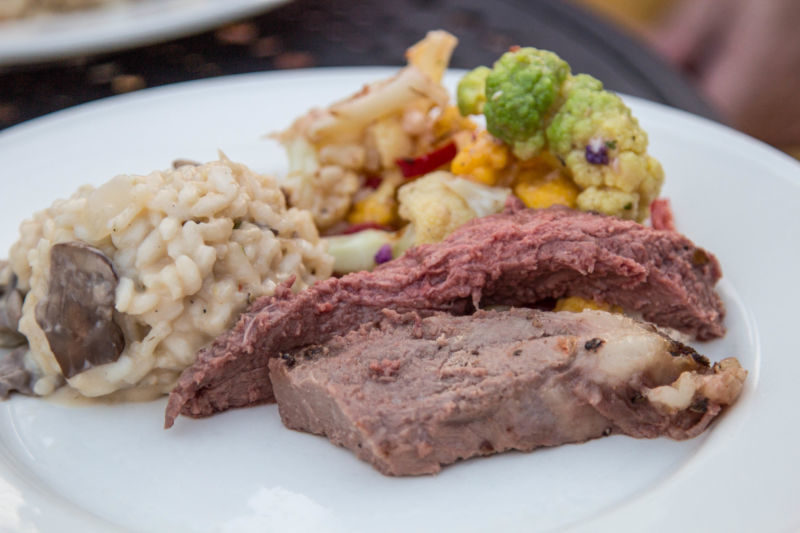 The buffet itself was very nicely done. They had a choice of roasted smoked beef, or chicken with a lightly spiced rub on it. There were a couple of salads, and a nice mushroom risotto. For dessert, they set up bite size treats in the members room (I might have had to sample all of them to ensure quality). I have to say they were yummy! 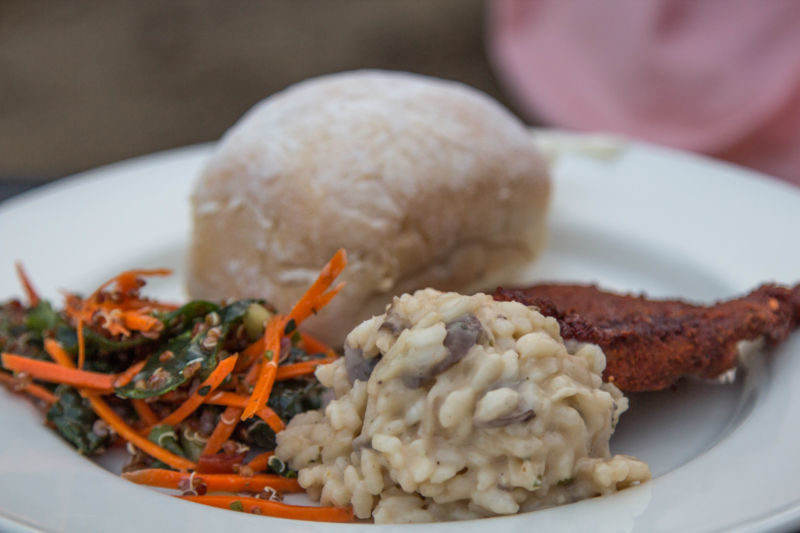 After the buffet, I tried the blind-tasting competition. There were bottles in black sleeves, numbered one to four. In front of them were listed four different wines: Diamond Mountain Merlot, Sangoivese Classico, Howell Mountain Cabernet Sauvignon, and Napa Valley Cabernet Sauvignon. All bar the Merlot were being poured at the Harvest Party, so identifying them should have been easy. I wish we knew the results and if I managed to guess them correctly.

California Girl comments: While The Brit was off testing his knowledge of the Luna wines in the blind tasting, I went off to talk with Andre Crisp who is the President and CEO of Luna. I asked him what his favorite tradition of the harvest is. His reply was absolutely lovely! He said his favorite harvest tradition is the blessing of the grapes which is performed by his minister. He loves that they thank God for the abundant harvest and the wine that is made. I could absolutely drink to that sentiment.

California Girl comments: The next person I spoke with after a wild goose chase through the crowd was the winemaker, Shawna. When I asked her the same question, she told me that they order quality pizza from one of the local restaurants and open bottles of wine from the previous year and enjoy the fruits of their labor. Everyone participating in the harvesting of the grapes gets to partake in the wine and pizza too. When I asked her what kind of pizza she orders she laughed and said, “Anchovy and Jalapeno”. Um, I think she is still suffering from pregnancy cravings with that one. Yikes!

California Girl comments: When I asked Shawna about any superstitions, she got a nervous giggle. Oh this I had to hear! She said, there is only one thing about which we are superstitious: We think we have a haunted fermentation tank and none of us want to use it!  Ok, I wasn’t expecting that one for sure. I wonder who or what is haunting it?

California Girl comments: All in all people had a great time enjoying the beautiful evening. The weather was perfect; the food, music, and wine were its equal. One special little guest was dancing as she enjoyed the bread sticks and the music. 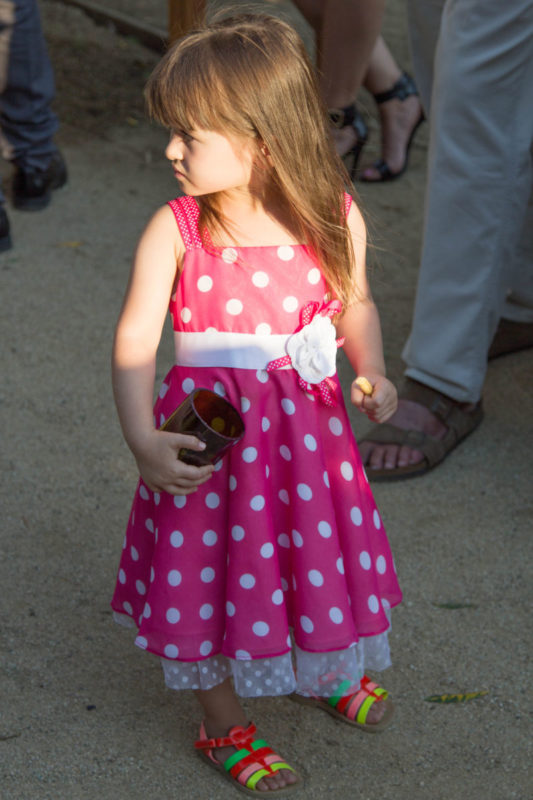 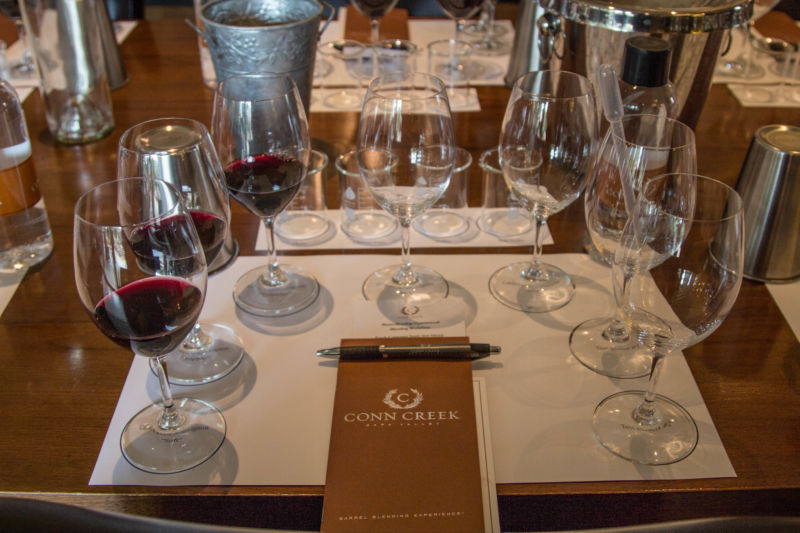 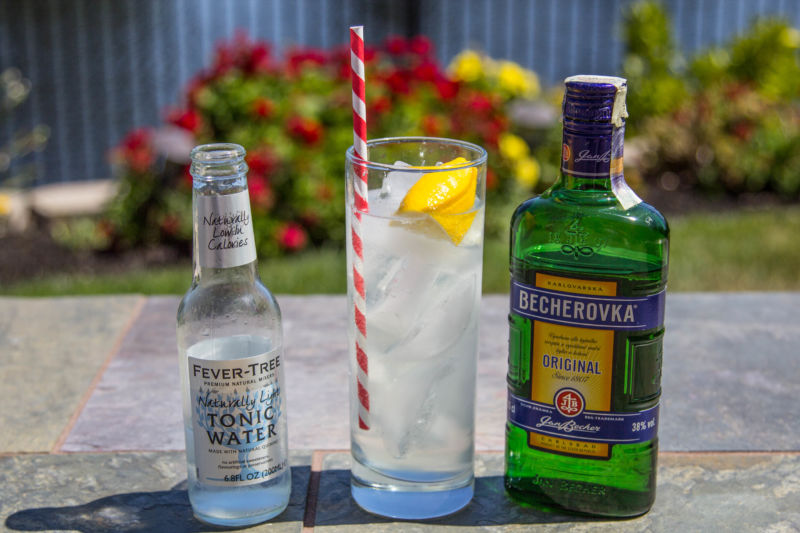