Tuesday June 11 is National Gin Day. That seemed like the perfect excuse to make a Gin cocktail. OK, I do not need much of an excuse to use Gin. Many of my favourite cocktails have Gin as the base spirit. I have written about Martinis and Bees Knees in the past. Therefore,  I used this occasion as inspiration to try something new:  the Hanky Panky.

The Hanky Panky is a classic cocktail. Created by Ada Coleman who was head bartender at the Savoy’s American Bar.  She made cocktails for, among others, Mark Twain and the Prince of Wales. She invented The Hanky Panky for Sir Chales Henry Hawtrey, a famed actor in the late nineteenth and early twentieth century.  Despite the name, he is no relation to the Carry On actor whose stage name was Charles Hawtrey.

Ada Coleman told the story of the cocktail’s creation to The People paper in 1925:

The late Charles Hawtrey … was one of the best judges of cocktails that I knew. Some years ago, when he was overworking, he used to come into the bar and say, “Coley, I am tired. Give me something with a bit of punch in it.” It was for him that I spent hours experimenting until I had invented a new cocktail. The next time he came in, I told him I had a new drink for him. He sipped it, and, draining the glass, he said, “By Jove! That is the real hanky-panky!” And Hanky Panky it has been called ever since.

The Hanky Panky is a variation on the Sweet Martini; a drink that I consider inferior to the classic Dry Martini. However, Ada’s twist is enough to lift the drink and make it a worthwhile addition to my list of cocktails.

In an ice filled glass

We used La Pivón Sweet Vermouth. Unusually, for Sweet Vermouth it is from Spain and not Italy. It offers more character and spice than normal sweet vermouth. It is well worth seeking out.

The Gin was The Botanist, made on the Scottish island of Islay. Despite its origin, it is readily available in the US. This bottle was purchased from Bevmo. 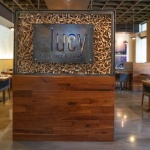