Recently Amber, Wen, and I spent a few days in Downtown Walla Walla in Washington. The town is at the heart of the Walla Walla AVA, a wine producing region that spans the Washington/Oregon border. The catalyst for our visit was the Wine Bloggers Conference. This annual event is in its eleventh year; we attended our first last year when it was held in Santa Rosa. The conference covers sessions on wine writing, a chance to meet fellow wine writers, and explore wines from all over the world. There is, of course, an emphasis on the wines local to the conference location.

Neither Amber nor I had any real experience of Washington wine. Moreover, I had never even visited Washington; aside from a few hours in Seattle Airport on the way back from London a couple of years ago.

Walla Walla means “Place of Many Waters” in a native American language. It sits only 6 miles north of the Oregon border and 275 miles from Seattle. Last year we drove to the conference since it was less than ninety minutes from our home. Since the drive to Walla Walla is over eleven hours, we decided to fly. There are two flights a day into Walla Walla Regional Airport, both of them from Seattle. The first flight arrives at about 11 am, which would have meant that we would have missed the pre-conference events. Thus, we arrived two days before the formal start of the conference.

We were staying in the Marcus Whitman Hotel; which is celebrating its ninetieth anniversary in 2018. Since the hotel is a block away from Main Street, it was easy to explore Downtown Walla Walla.

It seems that over half the businesses in the block between the hotel and Main Street are tasting rooms; there are even several in the hotel itself. Knowing we would have plenty of local wines during the conference, we did not go into any of these tasting rooms. We did, however, go to an excellent wine bar called The Thief.

We had a taste of a stunning white Chateauneuf-du-Pape, the 2015 Chateau Beaucastel. The second wine that we tried was a Grenache-Syrah blend called The Green Room from Ochota Barrels in the Adelaide Hills of Australia. The fruit is picked early and spends only four months in barrel. This red wine was light in colour and body, with a slight sparkle. The youth and light body led me to expect a thin flavour palate, but the fruit and spice are strong and lively. An unusual wine, but odd in a good way.

Neither of these wines is from Walla Walla, nor even from the US. This is not by chance; The Thief focuses on wine from outside the country. The knowledgeable staff makes this a great place to expand your palate beyond the wines with which you might be familiar.

On our first night, we ate at a French restaurant called Brasserie Four. The wine list was interesting, but my attention was directed to the wall of wine. Several shelves filled with wine from Walla Walla, France, and elsewhere provided a distraction that could have prevented me from ordering a bottle. Fortunately, Wen has familiarity with Washington wines and suggested a bottle of Amavi Syrah. This spicy and fruity wine paired well with my order of B4urger. (No that is not a typo.) This was a decadent French variation of the classic American dish: Vermont duck breast burger, Hudson Valley foie gras on a Kaiser roll, served with fries.

For the next three nights dinner was part of the conference, so our next opportunity to sample Walla Walla restaurants was on our last night. At the recommendation of several locals, we sauntered across to Whitehouse-Crawford. This restaurant is in an old lumber mill. The mill opened on the site in 1880 but was burnt down in 1903. It was rebuilt the following year, this time with brick. It continued functioning as a factory until it was sold to the city in 1988. The interior of the restaurant is spacious, with polished wooden floors. The restaurant website states that this red fir lumber was cut over 100 years ago.

Since this was at the end of the conference, we had drunk our fill of wine. So we did not study the extensive wine list. I did order a Lime Daiquiri, which was beautifully presented and was an ideal complement to the Vietnamese Fried Calamari which came with Nuoc Cham, a ginger and garlic sauce. For my main course, I had the excellent Japanese Style Fried Chicken. The chicken was served with a creamy tofu sauce and ponzu. The textural and flavour contrast of this dish was excellent. I rounded out my meal with a single scoop of a refreshing nectarine sorbet.

The Winebloggers Conference kept us busy, as you will see in the next few weeks as we write about some of our experiences. The downside to having such packed days is that opportunities for exploring Walla Walla were limited. However, what we saw here and in the wider region has whetted our appetite for a return in the not too distant future. 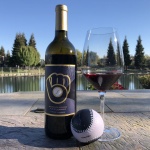 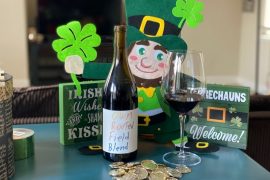