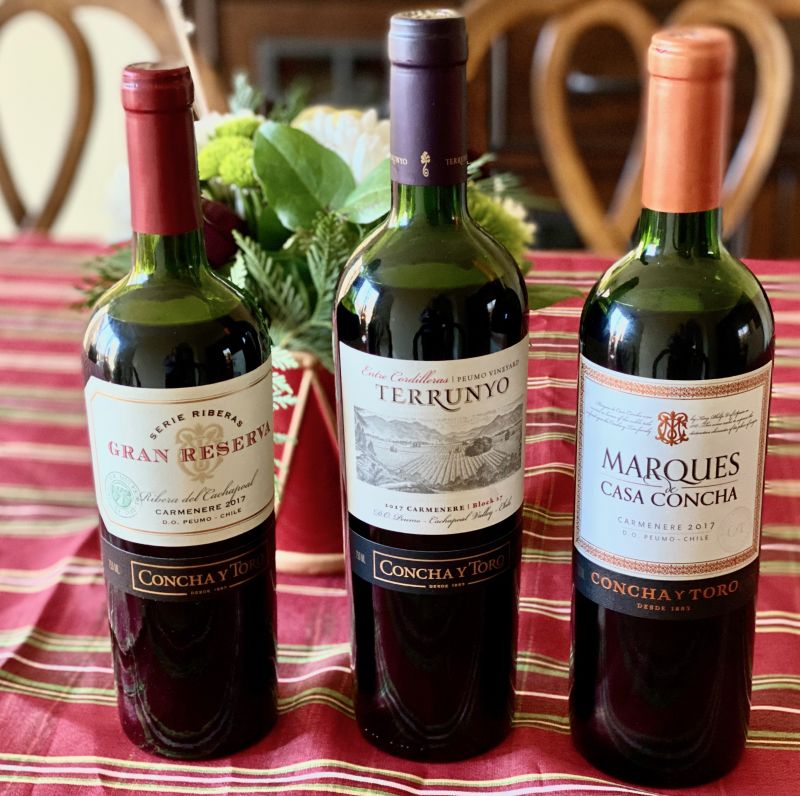 Disclaimer: The three bottles of Chilean Carménère reviewed here were provided as samples.

Almost without fail, fairy stories start with the phrase “Once Upon A Time”. With the same frequency, tales of grape varieties include mention of Phylloxera. So it is with the focus of today’s article: Carménère. It originated in Bordeaux as a blending grape; playing much the same role as Petit Verdot does today.

Then in 1867 Phylloxera wrecked havoc across Europe. Carménère plantings suffered especially heavy losses. The variety was assumed to be extinct. It appeared that this was not a tale that finished “Happily Ever After”.

Fast forward over a century and the story recommences some 7,000 miles from Bordeaux. In the 1850s, settlers brought European vines to Chile. Merlot was a popular grape for this trans-atlantic transplanting. Inadvertently, these Merlot plantings included Carménère. Chilean growers named it Merlot Peumal or Merlot selection; assuming it to be a Merlot clone. It was not until the closing years of the last century that the truth came to light. A scientist researching why some Merlot vines ripened earlier than others identified Carménère. Far from being extinct, it was flourishing in Chile. In 1998, the country’s Agriculture department officially recognized the variety. Like Sleeping Beauty this grape returned to the world.

About 80% of the world’s Carménère is grown in Chile. There are twenty-five thousand acres of the variety in Chile. In comparison, seventy acres remain in its original home of France. 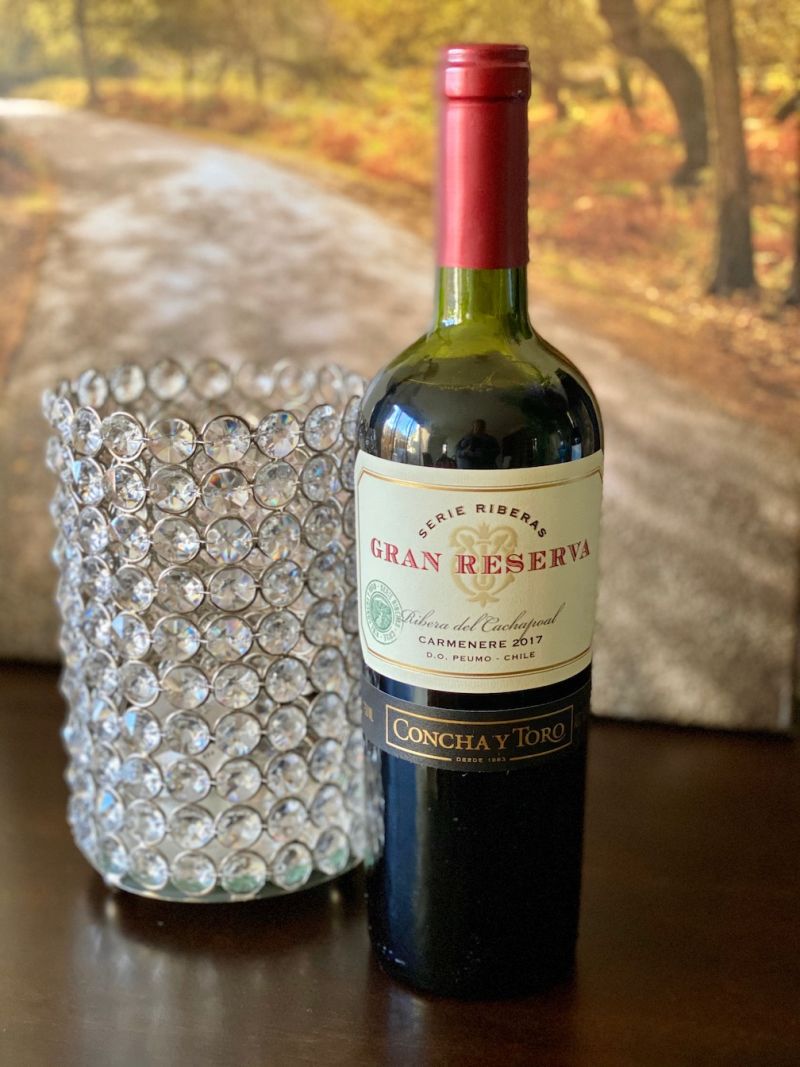 Concha Y Toro, a large South American producer, supplied the bottles of Carménère for this review. Founded in 1883 by Melchor de Santiago Concha Y Toro, who brought grapes from Bordeaux to start his plantings. Most of their vineyards are in Chile, but they own property in Argentina. They added to this in 2011 with the purchase of some California wineries.

The three bottles, all from the 2017 vintage were :

The first of the trio is from the Rapel Valley wine region. With the other two from the Cachapoal Valley, which lies within the Rapel region. 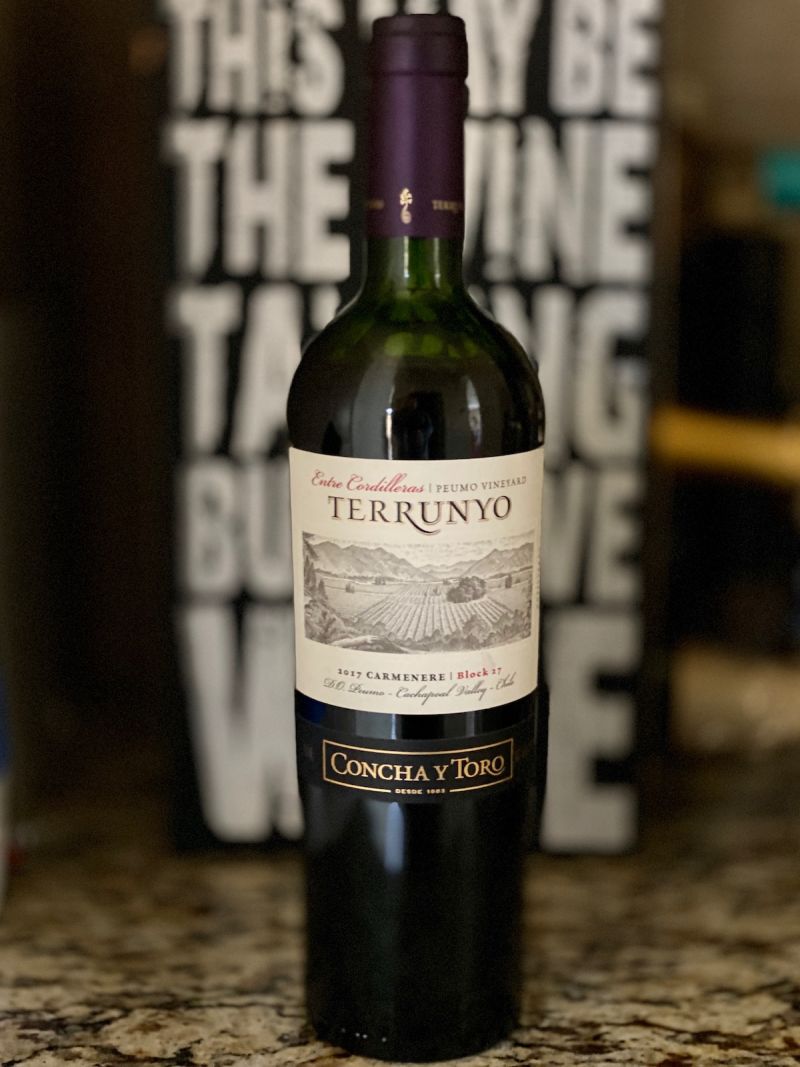 The Marques de Casa Concha offered a rich nose with restrained fruit and rose petals. Initially tight, the wine had good acidity, tanins that danced across the tongue. Notes of cherry and granite led to a finish longer than the initial tightness suggested. Time will be kind to this wine.

The Terrunyo had a more appealing set of aromas; raspberry, rose petal, and minerals. Strong acidity dominated the initial sip. Notable, but not overpowering, tannins relegated the cherry notes to third place. In the finish delightful notes of leather emerged. This is not as approachable as the previous one. This is a wine to keep for a few more years. The balance and lack of flaws make it drinkable now, but that would be a waste.

The third bottle: Gran Reserva, Ribera Del Cachapoal, falls into our bargain wine price point. The nose had the same balance of fruit, rose petals, and minerals. This wine was softer with a heavier accent of fruit in the form of cherry and redcurrant. Again the strong acidity spoke to a food friendly wine. The finish exposed leather and tannins left a tongue coated with fruit inflected dust. The most approachable and ready to drink of the three wines. An ideal Tuesday evening wine. 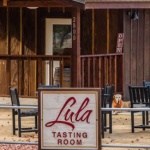