Campbell’s is a restaurant in the town of Portpatrick, Scotland. This fishing port sits on the south-western tip of Scotland. A handful of houses, hotels, and restaurants sit on the curved road that runs around the bay. More homes are arranged on the hills that rise steeply from the shore, looking down at the fishing boats that bob on the sheltered waters of the harbour. The Irish coast is just over twenty miles away. On the day that I visited, clouds lay low and heavy casting a grey hue across the town, but almost as soon as I arrived those clouds rolled back, blue sky emerged, and families started to play on the thin sliver of sand.

The menu at Campbell’s has a focus on seafood, most of it locally caught and in this case, local often means from the very boats that customers can see from the restaurant. The layout of the building, long and narrow, ensures that most tables are by the window. The interior is bright, making full use of the natural light that streams through the windows. The restaurant has been run by two locals, Robert and Diane, since 1998.

I ordered the West Coast Scallops. Flamed in brandy with a cream and fennel sauce. they were sat on a bed of finely sliced vegetables. The scallops were sweet and juicy; the sauce a subtle complement to the fish, flavourful, but not overpowering. The dish was served with new potatoes and chips (french fries); the latter a nod to the Scottish love of deep fried food. The potatoes were stunning, boiled and served with butter and herbs. It has been a while since I ate such tasty potatoes.

I had a small glass of the house white: Comte Tolosan, Pierre et Papa. This wine hails from the south-western part of France and is a blend of Colombard and Ugni Blanc. The nose was honey and herbs. It was served at a good temperature, chilled and not cold. It was a crisp wine, with hints of melon. Unremarkable, but a good choice for a house wine.

My mother ordered the seafood platter; a mass of salad with lobster and crab. The lobster was caught in Portpatrick, as fresh as possible. It was served in the shell; fortunately, Campbell’s provided both a lobster pick and cracker. There was a large amount of lobster, so my mother shared some of it. The meat was firm and tasty.

The word “wee” is used by Scots to mean small or little. It is also frequently used without any meaning at all. For example, when we asked for the bill, the waitress said she would be with us in “a couple of wee seconds”. Two seconds is an absolute measure, you cannot have a small two-seconds. She repeated the same phrase as she passed the table again, so it was not less than two seconds, although we were not left waiting for the bill for long.

The service was friendly and both dishes were first class. Portpatrick is remote but beautiful. Campbell’s alone is worth the drive. 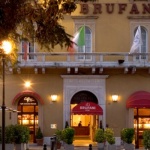