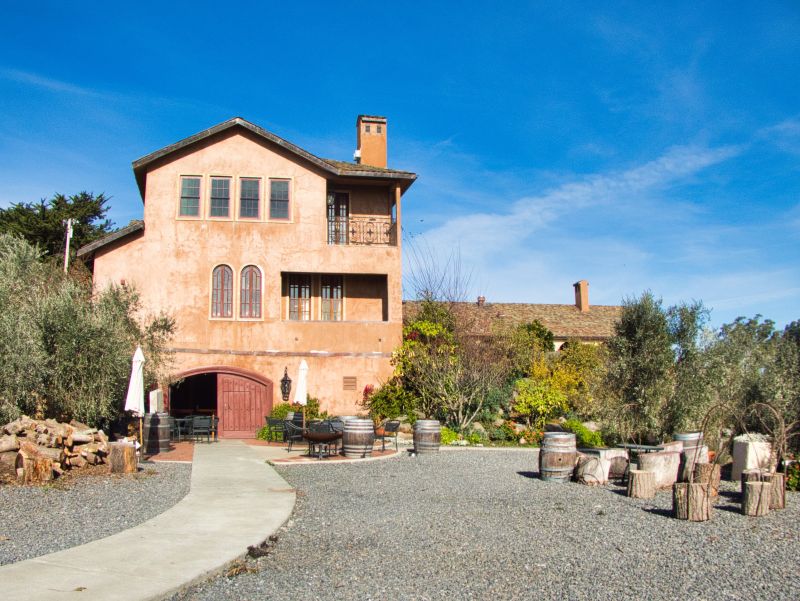 We recently received an invitation to visit Azari Vineyards. We knew nothing about the winery, so we were excited to accept the invite. It was a beautiful clear Saturday in December that we drove through Petaluma and along a minor road that led up into the hills. Our GPS told us we had arrived, but there was no sign for a winery, just a street number on a gate post. The number matched the address we had been given, so we pushed the buzzer, announced our presence and the gate swung open. Following the instructions, we proceeded along the driveway until we parked alongside an old Studebaker truck. On either side of us were buildings that would not look out of place in Tuscany. In front of us we looked down across rolling dairy pastures; not a vine in sight. 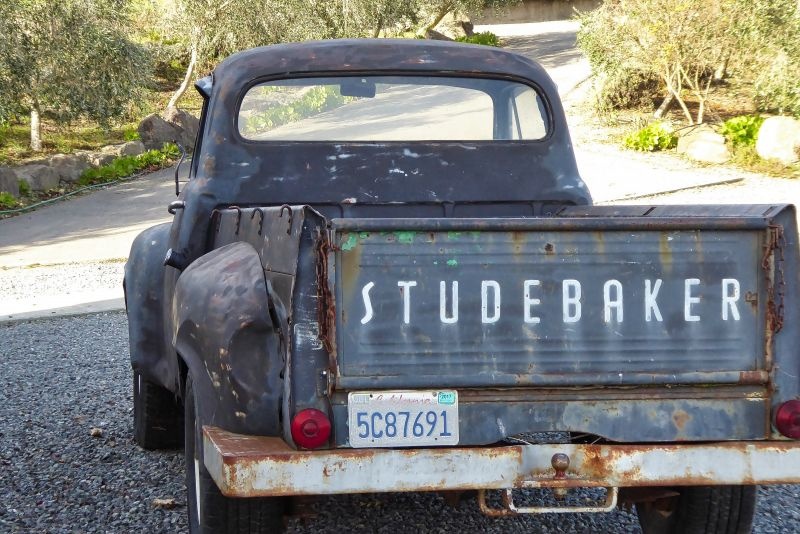 We were met by Kaveh Azari, son of the winery’s founders. The Azari family hails from Iran. This is the third winery we have visited this year with Persian roots; the other two were Darioush and Quintessa. The family bought the land as pasture in 1989 and converted it to a vineyard when their kids left home. He led us into the tasting room, past a wood-fired pizza oven in which logs were already burning. The tasting room was simple and functional. 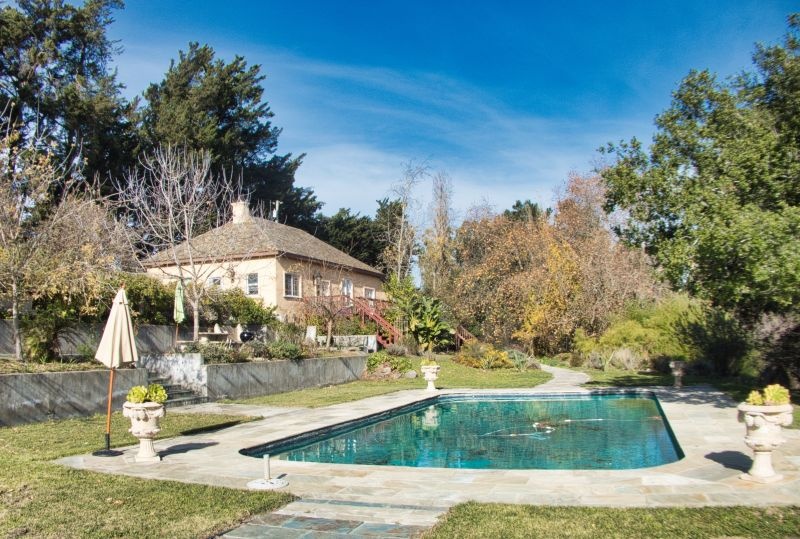 Amber comments: One of the many things that makes this winery special is that they have multiple homes and cottages for rent on the estate via Airbnb. I immediately thought to myself that it would be a fantastic holiday in wine country until Kaveh explained that the homes were currently being used to house victims of the Sonoma County Fires. I was so touched by the generosity of the Azari family, who have chosen to give back to the community in this way. How amazing! 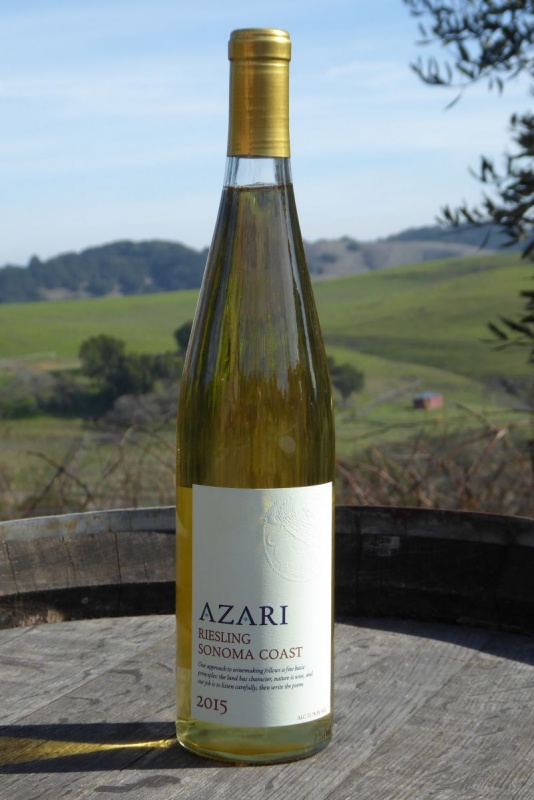 We started with the 2015 Sonoma Coast Riesling, which sells for $35. The grapes are from the Azari estate. Kaveh apologised that the wine was not fully chilled. Given how often white wine is served too cold in tasting rooms, this was actually a positive ad it allowed us to experience the full bouquet and flavours. The nose was a mix of honeysuckle and petroleum. The acidity was high and the wine was delightfully dry. The wine exhibited flavours of quince, peach, and a touch of lime with a granite minerality in the medium length finish. All too often California Riesling tends to the sweet side, so I am always happy to find a good dry example. 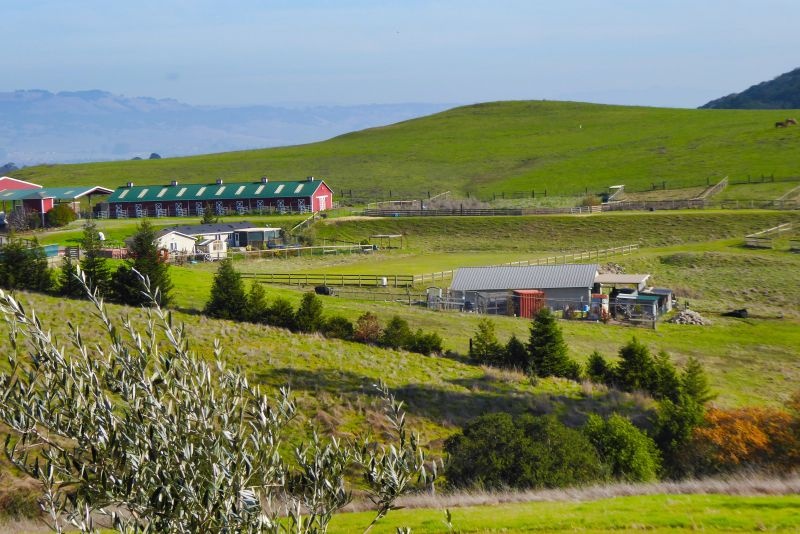 Amber Comments: We chatted with Kevah and strolled around the property as we sipped our wine. Views of rolling hills and valleys across the vineyards can be seen. It is a stunning place. It is absolutely worth the visit. 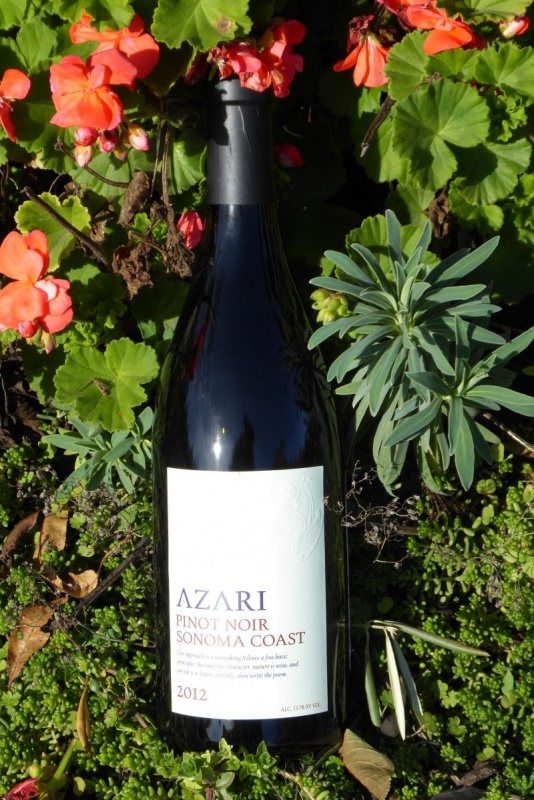 The second wine we tasted was the 2012 Sonoma Coast Pinot Noir ($75). The wine was not one hundred percent clear, with an opaque reddy brown hue.The nose was classic Pinot Noir; cherry, wet earth, and spice. The first impression when I took a sip was a silky mouthfeel, followed by silty tannins and sour cherry. There was a slight sweetness mixed with winter spice (cinnamon and cloves). This was a good, but not an outstanding example of Sonoma Pinot. 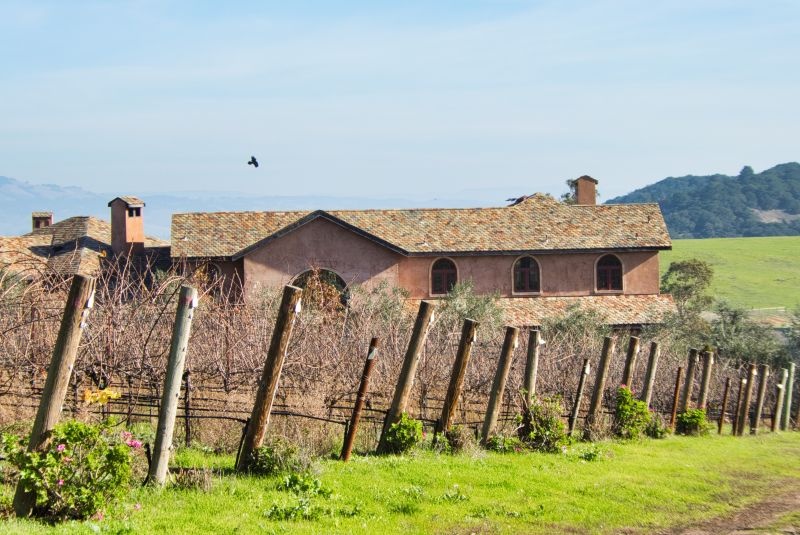 We enjoyed this wine as Kaveh walked us around the estate. He showed us the vines of Pinot, Syrah, Chardonnay, and Riesling, He also pointed out several properties that are available for rent via AirBnB. They are also working on creating another space for wine club member events; an already attractive site should soon be even more appealing. 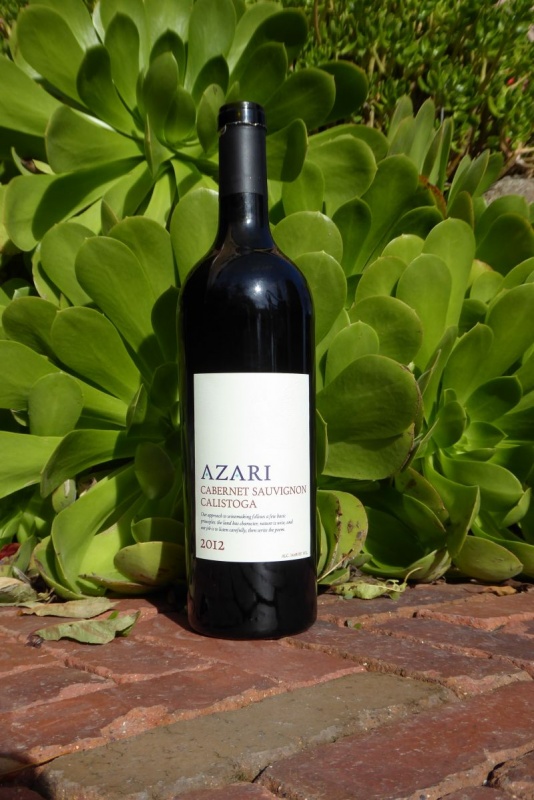 The third wine was the 2012 Calistoga Cabernet Sauvignon, which sells for $125. The grapes for this wine came from Kaveh’s sister’s estate. It offered a medium intensity nose of plum and dark chocolate. Medium plus acidity was backed by a very fruity flavour, with plum predominant. The tannins were assertive and stayed present through a medium length finish with rich fruit. The factors present in this wine suggest that it should age well and I think drinking it now would be a waste of potential. 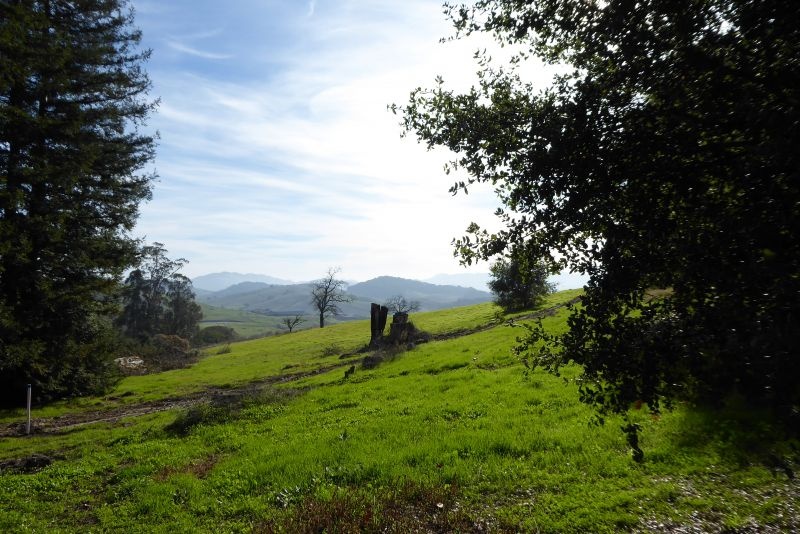 The fourth and final wine we tried was the 2010 Sonoma Coast Shiraz ($60). In Australia and South Africa, the Syrah grape is called Shiraz; the name of an Iranian city. Although the Syrah grape originates from France and not Iran, Azari and Darioush vineyards both use the Persian influenced name for the wine they make from the Syrah grape. The nose was intense and complex, offering dark berries, spice, maple, and brown sugar. In the mouth, the first impression was of sweetness. Subsequent sips led to a more nuanced mix of fruit, wood, black pepper, and cloves. The finish is what made this wine, a long rich finish from which raspberry emerged. Both California Girl and I saw this not only as the best of the four wines but a truly outstanding one. 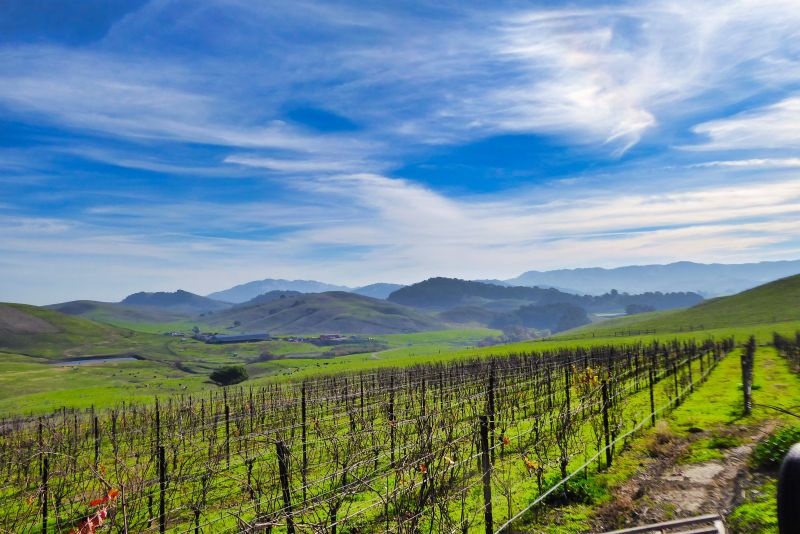 We enjoyed this last glass sat outside the tasting room as we ate pizza baked in the wood-fired oven. The tasty pizza was served with a dish of olive oil made on the property. This delightful extra touch made for a great way to finish a very enjoyable wine tasting experience. The cost of tasting at Azari is $25 per person and reservations are required. 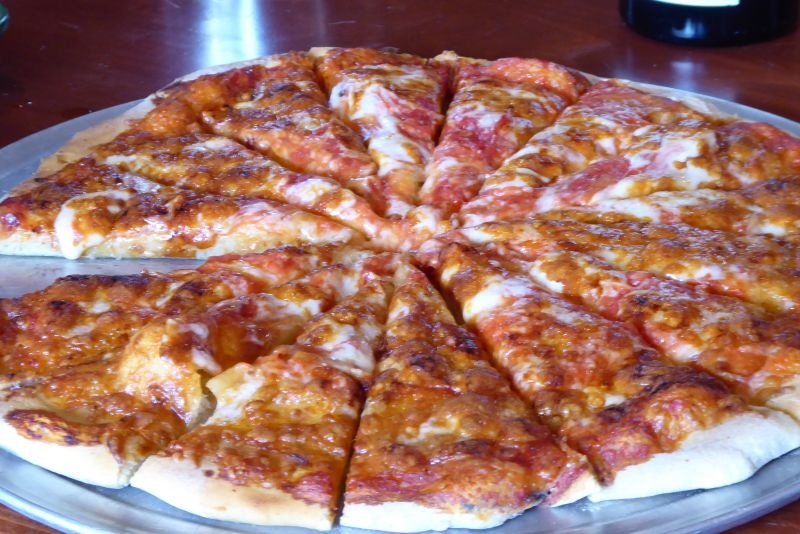 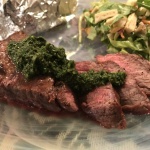 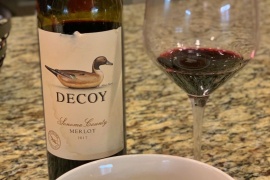